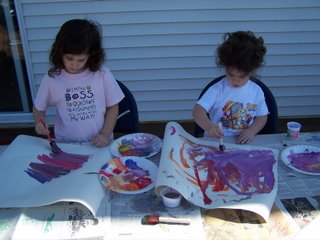 The weather was so beautiful today that the girls and I decided to do some painting outside on the deck. I pulled out all of my acrylic craft paints, some paper plates, a large roll of paper, and paintbrushes. We sat for a glorious hour creating one masterpiece after another. Here are a few pictures from our creative venture for the day. 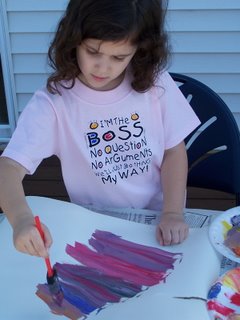 Here is Emma as she paints a cake. 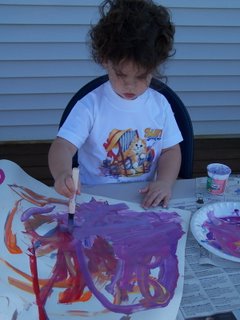 This is Zoe working hard on her painting.

And one final photograph: 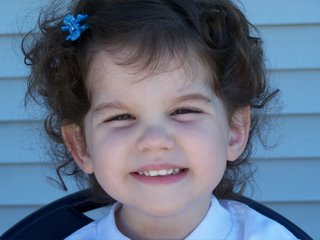 An artist satisfied with her work.
Posted by Heather at 10:42 PM 1 comment:

Ian has been taking karate for close to two years now, and he is now in a class that is late enough in the evening that I don't have to take the girls with me when I take him to class. So, since his Dad and I can both take him, and then have 45 minutes of alone time, we decided to take turns taking him each week. One parent gets one on one time with Ian in the van on the way to and from karate class, as well as 45 minutes of solitude, while the other parent gets two little girls, nineteen months apart in age, all to him/herself for the evening, and then gets the pleasure of getting them both ready for bed, all by him/herself.

As you can guess, we both look forward to our week of taking Ian to karate.

This week was my first week to take Ian, and I postively jumped at the chance. I have recently rekindled a love of mine that somehow got lost in the busyness of raising three kids and keeping a household together. Since we moved to our new house at the end of July, I've found several moments to look through the adult section of our library and just browse the shelves for some enjoyable reading. I have always loved to read, but I just haven't read novels in a long time. Self help books, magazines, newspapers, children's books, but not novels. So, after checking two books out of the library, not wanting to set too lofty of goals for myself, I slowly reclaimed my love of reading novels. I have now read five novels and have refound the joy in the written word to tantalize, excite, and draw out great anticipation.

Tonight was no exception. I could hardly wait to get Ian into his class so that I could run off to the library and look for a few new books. I also started a book a few days ago that I was sure I could finish today, if I just had the time.

And tonight I had the time. What amazed me, though, as I sat in a comfortable chair upstairs in the library, was how indulgent it all felt to me. Here I was, reading a book I couldn't wait to finish, while my girls were at home with their Dad STILL AWAKE. What surprised me even more was that I felt this way. It felt decadent and extravagant to have 45 minutes to read and look for new books. It also made me wonder how my life has gotten to this point, that 45 minutes of companionship with a good book makes me feel extravagant.

I guess being a mom, a wife, a sister, daughter, volunteer, it all adds up in your life, but also takes from it. While I completely feel you must do for others, that you could not or should not be selfish, sometimes taking a little time for yourself is the best thing you can do.

I did tonight, and it felt great. It also made me realize I'm a very lucky woman.
Posted by Heather at 10:08 PM 3 comments:

We have spotted a very mature praying mantis sitting on our house several different times this summer. After pointing him out to the kids, I often sit and marvel at how interesting this insect is. 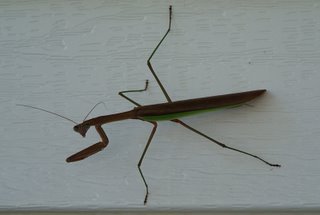 As a sophomore in biology class many, many years ago, I had to make an insect collection of forty insects, and we were not allowed to capture praying mantises because they were rare and ate so many other insects. That experience of catching, killing, and mounting insects to pins on a board for display gave me a good understanding of the difference between insects and regular "bugs." And while I still don't like bugs or insects a whole lot, I also find them somewhat fascinating, especially the praying mantis. 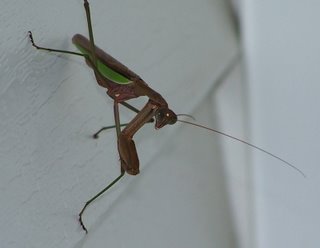 So, taking a page from Ree's love of close-ups, I have put a few pictures of our praying mantis I took on Saturday. Enjoy!

Aaargh! For the life of me I can't get my link to work! Go to http://pioneerwoman.blogspot.com to see some beautiful close up pictures. 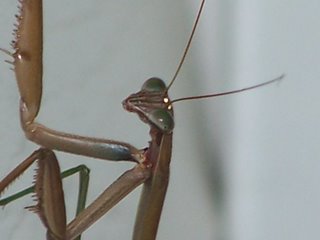 Posted by Heather at 9:19 AM No comments:

Yesterday, on the way home from a bowling birthday party that Ian attended for one of his classmates, we hit a car. Brendan was driving, I was in the passenger seat, all three kids were sitting in their respective seats in the back of the van when we crashed into a vehicle that pulled in front of us.

It was so fast. Driving, talking about going to get McDonald's for dinner, seeing the car stopped, seeing it pull out right in front of us, hitting it - hard. I don't really remember the impact itself. I mean, I remember the realization we were going to hit her, the sound of the hit, her car spinning, but I can't recall the feeling of the impact - the crash and bump I should have felt. It wasn't until after I checked on the kids that I noticed a scrape and a bruise on my shin, where my leg hit the dash under the glove compartment.

After Brendan jumped out of the car to check on the other driver, I jumped out and opened the back door to check on the kids. Emma and Zoe were so frightened, whimpering and crying, but safely buckled into their car seats. Ian seemed fine, his glasses were gone from his face, but he was worried about finding his GameBoy - so I knew he wasn't hurt. After calming everyone in my vehicle down, I waited to see what Brendan was doing. I knew the other driver had to have taken a much worse blow than we did, she was in a car, and was the one being hit by a minivan on the driver side, so I was a little worried.

Very quickly two police officers came and checked out the incident, called an ambulance for the woman and had an EMT check Brendan, myself and the kids out. Thank God we had them in car seats - all three of them. A few years back Illinois passed a law that said kids had to ride in booster seats until they were eight years old. It seemed a bit excessive, but we followed the law. Last night, Zoe was in her convertible car seat with five point harness, Emma was in her full back booster seat with seat belt adjuster, and Ian was in his backless booster. And I'm so grateful that they were. The girls appear to have no injuries whatsoever, and Ian has a nasty scrape/ bruise from the seat belt on his neck - but that's it.

While we waited for the police officer to finish the paperwork and let us know that we were not being cited, Emma kept inquiring about the accident. She told me several times that, "Daddy should be more careful." I tried to explain to her that it wasn't Daddy's fault, that the lady should have stayed stopped at the intersection but she didn't. She asked if our car was broken. I told her it was, but that we'd get it fixed. Her response to that was that we should get new pedals that would stop faster so we wouldn't crash again.

I've never been in a car accident before. This was really crazy. As I watched it happen, I just couldn't believe my eyes. Turns out the 21 year old driver of the car doesn't have a driver's license. It just reminds me that you can be the best driver in the world and do nothing wrong, and still be in an accident. Truly frightening.

I hugged my kids a little tighter and a little longer last night. I told each one of them that I loved them. I'm glad we're all safe.

For some photos and Brendan's take on the accident, click here.
Posted by Heather at 2:52 PM No comments:

I took Emma to Target today to buy some new shoes for school and the upcoming Fall/ Winter seasons that are fast approaching. I was thinking maybe we'd pick out some cute shoes that would look great with dresses, skirts and pants. Maybe a little something like this: 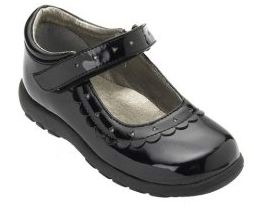 Or for something a little different, maybe a shoe with a little color, like this: 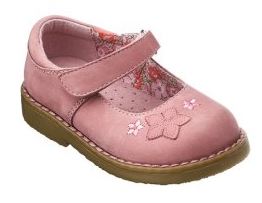 But Emma was not going to confined by the standard footwear of girls all across America. No. Emma tried on a few different shoes, some pink clogs, a brown Mary Jane, a pink leather Mary Jane, and then she saw it. The PERFECT shoe for her. It was this: 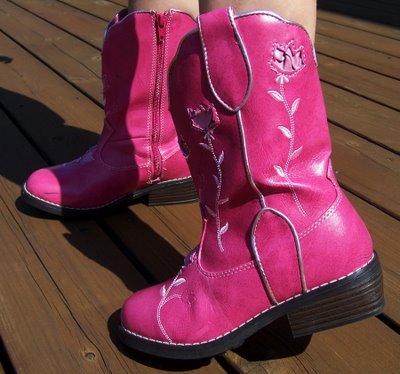 Pink cowboy boots. She loved them the instant she saw them, and putting them on only furthered her resolve. She must have the pink cowboy boots. I asked her if she would wear them with her dresses and to pre-school. She said she would.

So, I walked out of Target with bright pink cowboy boots for my four year old daughter. Definitely not what I had in mind when I went there this morning. But the smile on Emma's face told me I'd made the right choice in letting her get those boots. She wore them to school when we picked up Ian, and she wore them over to her friend's house and all over the neighborhood when they played outside.

Here are a few photos of her with her new boots on. One demonstrates her sassy cowgirl attitude, the other her cute cowgirl side. 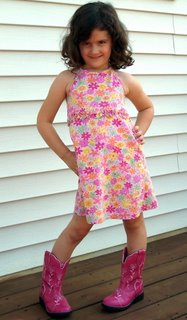 I decided that if anyone can pull off pink cowboy boots with style, it's an adorable four year old. Emma fits the bill perfectly!

(And yes, in the bottom picture one foot is facing forward, and the other completely backward. It's a special talent she has!)
Posted by Heather at 10:11 PM 3 comments:

I was putting a hairbow in Emma's hair, at her request, before we left to take her to her first day of pre-school. She sniffed the air as I brushed her hair off of her face and she said,"You smell good."

"Are you going to church while I'm in school?" Emma asked.

"Then why do you smell so good?"

Apparently I only wear perfume to church. At least she notices, though!
Posted by Heather at 1:09 PM 3 comments: