I have been feeling crafty lately. I have all kinds of craft ideas running through my head, and various amounts of supplies for scrapbooking, card making, stamping and other little fun things like that.

So what have I done? I decided to learn how to knit. Something for which I have essentially no supplies for and have to go out and buy. I'm sure my dear husband is thrilled.

This really came about because my six year old daughter received a teach kids to knit book along with some knitting needles and yarn from her Great Aunt Kathy and her Uncle Kevin. Great Aunt Kathy and Uncle Kevin are extremely talented knitters and were eager to pass on their hobby when Zoe showed an interest while spending time with them.

So, I have decided to teach her (and her eight year old sister as well), but knew for me to help them, I would need to learn myself, first. 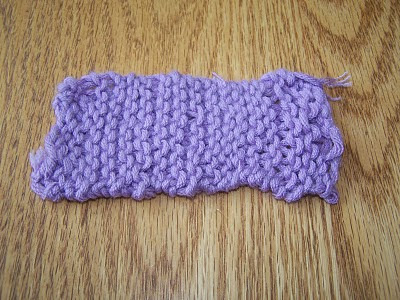 I have now knitted two things. The first is a purple rectangle, and despite the fact that I dropped at least two stitches and some of the stitches are ridiculously loose and some are too tight, I'm very proud of that rectangle. I have also knitted the first square of a banner the girls and I are going to knit after I teach them! This second piece of knitting is remarkably better than the first, and I'm now ready to learn the purl stitch! (So far all I have done is the knit or garter stitch. After I learn the purl stitch, I should be able to do more!) 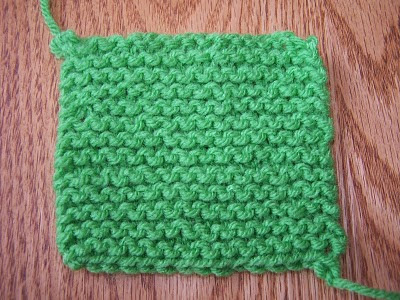 I am very excited at the prospect of making little projects with the girls, and I hope they learn to be great knitters like their Great Aunt and Uncle! And who knows, maybe I'll even make a scarf in time for next winter!
Posted by Heather at 10:48 AM 2 comments:

Well I did get a little fancy over the holidays and made a few pretty treats to serve. My husband has a department work party where the company brings in the main dishes, but the employees (and/ or their spouses) send in desserts and goodies.

I made my chocolate chocolate chip cake with peppermint buttercream filling and chocolate buttercream frosting. I wanted to fancy it up a bit, so I made white chocolate mint snowflakes to put on the cake. I finished with the words "Let It Snow" on top. I tried to make the words sparkly by applying luster dust, which didn't go too well. But I was really pleased with the results and my cake won two categories in the employee voting. I won "most appealing to the eye" and "most festive." (I actually tied with three other people in one of those categories, but I can't remember which!) 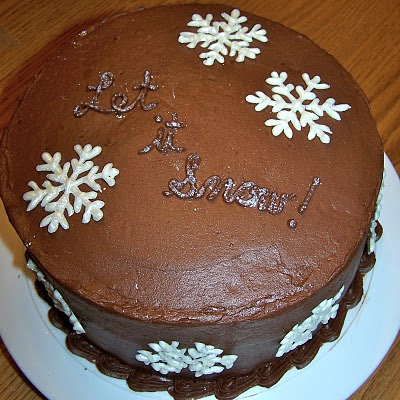 I also finally made Bakerella's Cake Pop's that she has become so famous for! I decided to make buttermilk Devil's food cake for the base. I then crumbled half of the cake and mixed it with vanilla frosting. I mixed the other half of the crumbled cake with peppermint frosting. I dipped them in a mixture of chocolate bark and Ghirardelli's bittersweet chocolate. Then I sprinkled pretty Christmas sprinkles on top and then finished them with a Merry Christmas sign or red or green bow. I love how they turned out! 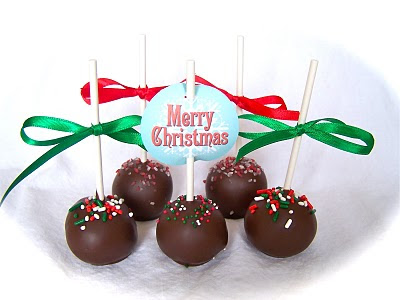 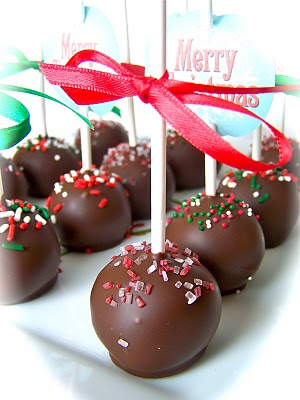 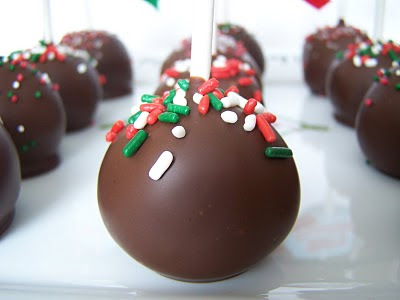 Now to start dreaming up my Valentine's treats!
Posted by Heather at 7:34 AM No comments:

Thursday, December 30th was my 38th birthday. And even though it is the new year, I want to talk about my birthday from last year. 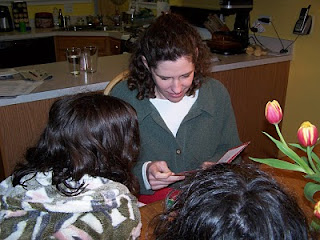 I had a really great birthday. In the morning I made muffins to take to my husband's grandparents, who we visited in the afternoon. December 23rd happened to be Brendan's Grandma McKillip's 95th birthday. Her party, unfortunately, was the weekend we had planned on going to Ohio for my family's Christmas. I had talked it over quite frequently with my mom, and with Brendan. My mom had offered to move our Christmas, but the only available weekend would have been the Saturday after Thanksgiving. Brendan didn't want her to have to do that, and for me to miss my extended family's Christmas, so we went to Ohio and missed Grandma's party.

To try and make it up to her, we decided to take the kids and visit Great Grandma and Great Grandpa. We had a lovely time visiting and had carrot cake and ice cream that they offered us. We also had some of the candy they received for Christmas. Brendan's grandparents have to be the two nicest people in the world. I feel so blessed and lucky to have them in my life, especially since all of my grandparents are in Heaven already.

After visiting with Grandma and Grandpa, we took the kids to Vaughn Athletic Center to go swimming. They have a great indoor pool complete with water slides and a splash zone. We all had a blast riding the water slides and the kids wore themselves out swimming and running across the lily pad floats in the pool.

Considering the late hour after we were done swimming, we headed to Portillo's and got take out for dinner. Ahhh, no cooking for me on my birthday! I had a fantastic hamburger and onion rings and we had some almond chocolate chip blondies for dessert.

I was serenaded with a rousing version of Happy Birthday by my kids and Brendan. and then got to open my gift. It was a pink iPod nano!!! Complete with $15 iTunes gift card! Brendan even had it engraved on the back, "To my favorite lady." It is awesome considering my iPod mini no longer would allow new music to be uploaded to it. I can now listen to my tunes again! 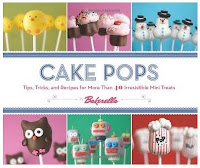 I have to also mention some of my other favorite birthday gifts, too. My sister got me "Cake Pops" by Bakerella. She gave it to me at our Christmas in Ohio, so it was just in time to help me with the cake pops I made for the first time for Christmas. (Pictures to follow in a later post.) I can't wait to try some of the other ideas in that book! My sister-in-law and brother-in-law got me a Starbuck's card! Woot! Woot! Now I have two gift cards to spend at the 'Bucks! It's going to be a fun January and February! And my mother-in-law got me a black zipper hoodie in a tall size! It goes all the way past my wrists! I'm in seventh heaven! (Talk to tall girls about finding clothes that fit, not fun!)

Anyways, it really was a great birthday. (Wow, I also like exclamation points!)
Posted by Heather at 9:13 PM No comments: