As I have gotten older, overall I am happier with my life. Staying home to raise my kids has been a challenge, but after 7 1/2 years of not working professionally, I am content with my place. I am more comfortable standing up for myself or my children, and I feel as though I have a network of friends whom I can truly trust, count on, and turn to for support.

But, with growing older comes the more uncomfortable aspects of life. A professor and mentor from college was diagnosed five years ago with Alzheimer's. His wife, who happened to be my cooperating teacher when I was student teaching and I are good friends, so I've heard first hand many of the struggles they are both going through in dealing with this disease.

When I was teaching, a colleague who was my same age, 25, found out that her father had a brain tumor. Within six months he died.

Today I mailed a card and a letter to two old friends, one another colleague from my teaching days, another an old acquaintance from college. When I began teaching in 1995, I worked with a wonderful teacher and woman named Mary. She was the model of patience with students, and I quickly came to admire her gentle and kind words she had for all people. We became good friends, and we often sat together at lunch or chatted before school with one another. She was the first person I told I was pregnant (after Brendan of course). She had a daughter named Heather who was just starting college and two younger sons. During the four years we worked together, her youngest son was diagnosed with Type 1 diabetes. He was only in junior high at the time. When I received her Christmas card this year, she informed me that he died about a year ago this month. He was only 21.

My other friend was someone I was never close with in college, but because of mutual friends we knew each other fairly well. We have spent college reunions eating dinner together and hearing about one another's families. She, like me, had three children, though she had three little boys. Her youngest, a little guy name Mikey, just died at the tender age of 13 months. He had many complications at birth, and finally lost his battle just this past Tuesday.

As much as I like the self-confidence of becoming more comfortable in my own (somewhat wrinkling) skin, I can't escape the fact that bad things happen to people we love and care about. It really tore me up to send that card and letter, but I'm sure it was absolutely nothing compared to what Mary and Danielle are going through in the loss of their children, or what Joan is going through in the slow deterioration of her husband to Alzheimer's.

I am going to take this day and do what those two mothers can't do, and that is hug my kids and tell them I love them. I don't want to take them, or anyone else that is important to me, for granted.
Posted by Heather at 12:48 PM No comments:

Today I brought out a surprise for my two girls, ages 4 1/2 and almost 3, to play with. It was my entire collection of Strawberry Shortcake dolls from when I was a kid that my mom in her infinite wisdom kept for me so that someday my kids could enjoy them.

I love(d) my Strawberry Shortcake dolls. I have an entire original set (I think) that consists of Strawberry Shortcake, Blueberry Muffin, Huckleberry Pie and Apple Dumpling and her pet turtle. I also have numerous others, along with their pets and even the two villains, the Purple Pie Man and Sour Grapes. I played with these dolls for many years, from at least fourth grade well into junior high. What can I say? I love dolls with scented heads.

Anyways, my girls have had a surging interest in Strawberry Shortcake recently with the multiple viewings of SS DVDs (we own three different ones), listening to SS CDs from the library and reading SS books. So, today I decided to quit being overprotective of my little dolls and share them with Emma and Zoe.

They were an instant hit. Emma quickly claimed Sour Grapes, a girl that wore a green and pink dress and had green hair, and Cherry Blossom, a little girl with pink curly hair. She had the Purple Pie Man and Sour Grapes getting married, go home, pop out the pink haired girl as their new baby and was well on her way to having lots of fun. 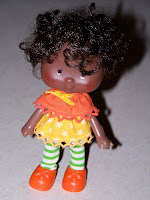 Zoe looked at all of them and grabbed Orange Blossom to play with. She had a grand old time running her around the room, making her cry or fly or ride in wagons. She played with a few other dolls, but kept coming back to Orange Blossom. As I was getting lunch ready in the kitchen I heard Zoe exclaim, "She's all brownie!" and then let out a great big giggle of delight. I couldn't figure out what she was talking about until I peaked in and found that she had undressed Orange Blossom completely, including those green and white tights that all (old) SS dolls have.

After lunch I re-dressed Orange Blossom while Zoe was busy playing with her brother's trains. When she saw me putting on the doll's shoes, Zoe looked at me with a frown and said, "I like people being naked. Naked people are my favorite!"

What more can you say to that?
Posted by Heather at 10:15 PM No comments:

"In the underworld there's two zombies."
Posted by Heather at 9:00 PM No comments:

These are Emma's homemade Valentines for her classmates in pre-school. She was very proud of her heart flowers and very excited to share them with her friends today. 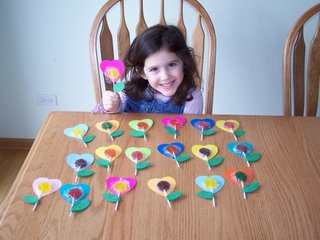 Have a great Valentine's day!
Posted by Heather at 2:11 PM 1 comment: