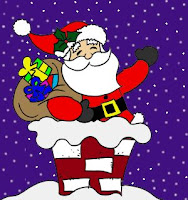 My ten year old son still believes in Santa Claus. Except, he doesn't. Actually, it's a bit complicated what he believes. But he is right there on the edge of fantasy and reality. Starting to realize that the Easter bunny and Santa are a bit implausible. Especially the bunny.

He keeps asking me if Santa is real. Except he does it in front of his seven and five year old sisters. I always say I'd be happy to talk to him about it, in private. This has only stoked the fires of skepticism inside of him.

Yesterday he got a hold of my electronic organizer and was looking through it. I thought little of it until he said, "Mom, I found a list on here called 'Ian'. And on the list is everything I got in my stocking last year." So, I waited. He gave me a look like, "I'm onto you." But didn't say anything more.

About a half an hour later, he asks me how the Easter bunny got the Easter eggs in our house while we were in Ohio. (He told me a big pink bunny hopping all around the world is a bit unbelievable.) But he couldn't figure out how his mom and dad, who were in Ohio the entire weekend with him, got Easter eggs all over the house here in Illinois.

I asked him if he would like to know the truth. He giggled nervously but said he was afraid to know.

He is right there at that point where he is old enough to know, but is not sure if he wants to know or not. I think he believes Santa and the Easter bunny are not real, and that his Dad and I might be those characters, but he isn't quite ready to give up the joy and magic of Santa. And maybe the thought that with Santa, he could get almost anything he desired, but not so if it's us. I don't know for sure what it is , but I'm enjoying the ride.
Posted by Heather at 1:04 PM 4 comments: