A Visit With Santa

I took the kids to see Santa Claus today. I wasn't sure I was going to do it today or not, so I didn't tell them until just before we went. That meant Emma found out just before picking Ian up from school. She was all atwitter with excitement for seeing Santa. She wondered how long it would take us to get to the North Pole. I explained that it was way too far to go all the way to the North Pole, so Santa came here for a little while so we could see him. She seemed happy with that explanation and couldn't wait until we could get Ian and go see Santa. I told Ian we were going to see Santa when he came out of school and he was very excited. He wondered how Santa travelled here and how long it would take until we saw him. He also wondered if Santa was real, which I told him he better not say to Santa! (He's been bringing this up a lot lately, though never asking us if Santa is real, just contemplating it.) He also said on the way that all he wanted for Christmas was for all of us to have a good Christmas, which I thought was sweet (though probably involves him receiving some specific gifts that we've been hearing about for the last two weeks!)

I took the kids to see Santa at the Phillip's Park Zoo Welcome Center in Aurora. It was great! First of all, there was no one else there. We had Santa and the entire place to ourselves! Second, there's no photographer, you bring your own camera and get your own pictures. Third, it's FREE!!!! Finally, the Santa is very nice. 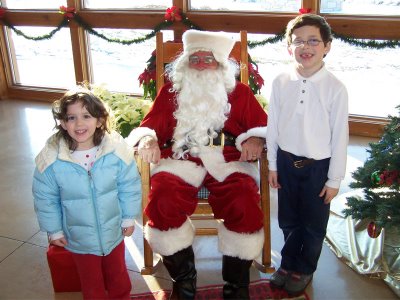 While Ian ran around looking at all the mastodon fossils located in the Visitor's center, Emma decided to talk to Santa. For all of her excitement about seeing the man in red, she clammed up at the actual meeting. When asked her name she squeaked out an "Emma" and then stood there silent. Santa asked her what she wanted for Christmas and all she said was, "A Gameboy." (Her big brother has been filling her head with ideas about princess and Barbie gameboy games and that she can get a Gameboy when she is older - she has never played a Gameboy, though she has watched her brother play his often enough.) Santa asked if there was anything else she wanted, and I prompted her with a few suggestions which she repeated and then she was done. Santa gave her a coloring book and Emma beamed as she left Santa's side.

Ian took his turn next and took no time at all in mentioning his number one gift choice - the DK King of Swing Gameboy game. After that his memory faltered a little and he mentioned how he had a whole list at home. I reminded him of one or two things, after which he recalled two or more things on his own. Santa reminded Ian he could write him a letter with the other ideas. Ian received his coloring book and went back to invesigating the fossils.

Zoe was a bit of a harder sell. She was interested in Santa, but from afar. She was fine sitting on her seat about 15 feet from Santa,and even okay when brought closer in my arms, but once Santa started talking to her, she pulled her sour face and covered her eyes. We asked her if she wanted to sit on Santa's lap, and she gave an emphatic "No!" I tried to get all three kids with Santa, but Zoe would have nothing to do with it.

On our way out Santa reminded the kids to leave cookies and milk for him, and some carrots for his reindeer, because they get hungry, too. It was a lot of fun, and much better than the lines and chaos of the mall. If you have a kid and you live in or near Aurora, it is well worth the time to stop by the Phillips Park Visitors Center and say "hi" to Santa. Who knows, maybe he'll bring you something special, too!
Posted by Heather at 9:15 PM