Way back in August we had a double birthday party for Ian and Emma. Ian's birthday is in July and Emma's is about two weeks later in August, so it just makes sense to combine them when it is going to be a family affair. Since they were little I've been making their cakes myself. I love seeing their faces when they see the cakes they requested.

This year was no exception. Emma changed her mind repeatedly and finally decided on a cake with hearts all over it. Ian initially talked about a Pokeball, which I thought would be pretty easy. And in the end he did pick a pokeball, but not the regular recognizable one. No, instead he chose a Masterball, which are more successful when being used to catch Pokemon. After asking Ian to describe the Masterball to me, I decided to Google it for an image I could understand. After finding and printing out a picture of the pokeball, I went to work. 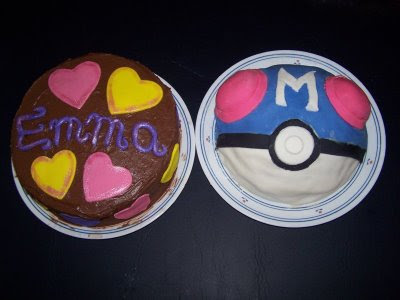 Emma's cake is on the left. Her's was a yellow cake with chocolate buttercream frosting. The hearts and her name are made out of marshmallow fondant. I brushed some pink luster dust on her name, and she wanted me to add more to the hearts. Here's a close-up of her cake: 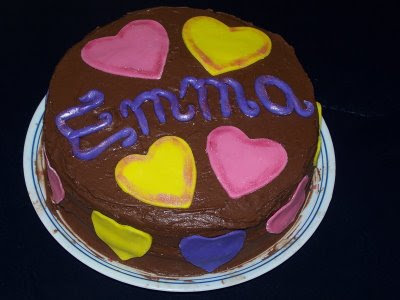 Ian's cake is the Masterball on the right. He requested chocolate cake with vanilla buttercream frosting. I used the top of two cupcakes to make the bumps on top of the cake. The cake is covered in marshmallow fondant. In the end Ian was thrilled with his cake. Here is a more detailed look at it: 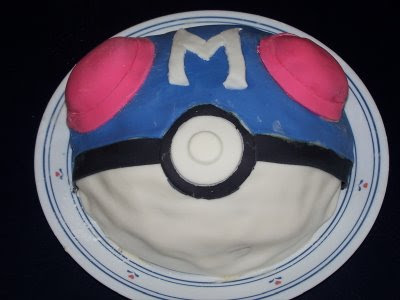 Actually, they both were happy with their cakes, which made me happy. I can only imagine what they'll come up with for next year!
Posted by Heather at 7:24 AM

those are wonderful Heather, you are very talented!!

The cakes are awesome.

Hi Heather! I'm Nikki's friend, she sent me over to your page.
Those are awesome cakes!

Hi Heather - I just found your blog after searching for "how do I make a Batman cake?". I live in New Zealand and am about to make a batman cake for my grandson - I liked the simplicity of your one so might just copy that and maybe put a bat car on it too or something.

It was nice reading about your life in USA - not too different from life here now that the world is such a small place!