Zoe, my first grade daughter, was having Ocean Night with her class, and her teacher asked if some parents would make snacks. So, I volunteered and started scouring the internet for cute ideas. I finally decided on several different cupcakes. The plan was to make 48 of them, with different ocean animals on each one.

My first cupcake was a sea turtle cupcake because Zoe's animal that she researched was a sea turtle. I made about 8 of these. I loved how sweet these little guys were. The head was a large green gumdrop with miniature chocolate chip eyes, the shell was a sandwich cookie half with piped on frosting and dipped in green sugar, and the legs were spearmint leaves cut to size. (I also loved that I used NO FONDANT on any of the cupcakes, all just cookies, candies, and other yummy goodies.) 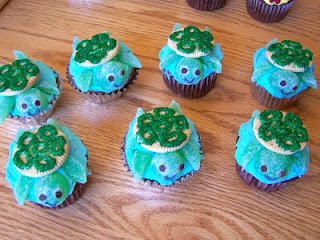 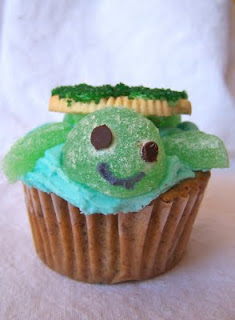 My next set of cupcakes were colorful fish. I made 22 of these. They are simply M&M's and a flattened fruit slice cut in half. Super easy and super cute! 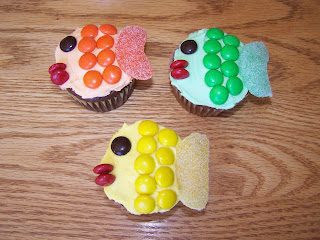 I made these Octopus cupcakes with orange melting disks from Wilton. I just kind of winged it (and yes, I know Octopus have eight legs, but they looked cuter with only six.) I put it on top of some pretty blue buttercream frosting, and voila - an octopus cupcake. I made the seahorse the same way - but only made one of these. (Zoe's best friend did her project on seahorses, so I had to make one!) 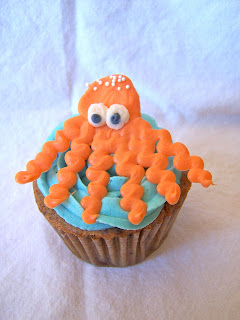 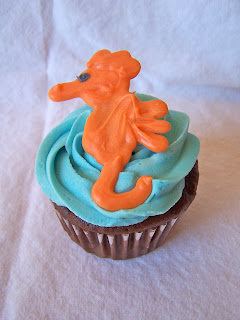 I made these whales and whale's tails cupcakes with Twinkies and chocolate wafer cookies. I got the idea from the "What's New Cupcake" book that I got for my birthday from my mother-in-law. I was surprised that they actually turned out almost as cute as the ones in the book. The heads were popular with the kids, but none of the tail cupcakes went! 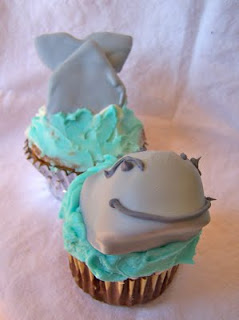 By far, the most popular cupcake (and I only made three!) was the shark cupcake. It is also made with a Twinkie and a chocolate wafer for the fin. The mouth is red fruit roll up, the eyes mini chocolate chips. These were the first off the table, and probably into boy's hands, though I cannot guarantee that! 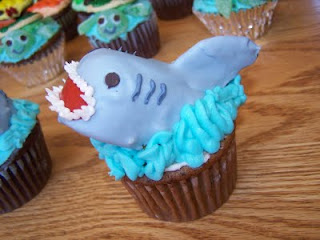 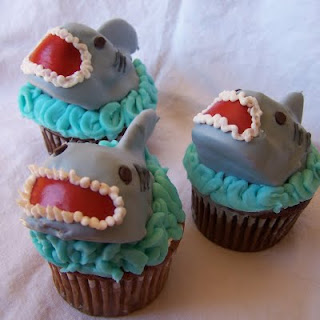 I spent an entire day decorating these, but it was so worth it seeing the kid's faces when they got to have one!
Posted by Heather at 7:00 PM