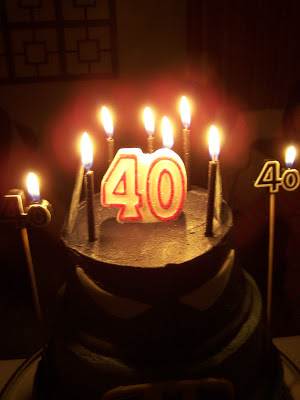 This year my husband and I are both turning 40.  Our original plans were to not actually have a party for either of us, but to go away for 4-5 days (without kids!) while my Mom and Dad watched the kids.  We have never gone away for more than a weekend since having the kids and it has been several years since we've even done that.  Unfortunately, both of my parents were diagnosed with cancer this year.  My Dad's prostate cancer was discovered first and successfully removed and his bill of health is excellent.  Unfortunately my mom was diagnosed with stage IV inoperable liposarcoma in early August and passed away on September 16.  It has been a difficult adjustment to life without her, and on top of that her birthday (would have been her 70th) was the day after my husband's 40th birthday.

I had to wrap my head around everything and so planning for Brendan's party was put off a little until I finally got in the mood to celebrate.  When I finally did I had about three weeks to get everything together for a little family soiree.  I decided on a DC superhero theme, as Brendan is a huge Batman and DC comics fan.  I tried to make the theme both fun and not too juvenile.

What I finally came up with was a few neat decorations, a fun cake, and some themed drinks and snacks.  My kids helped by making some posters and Emma even made herself a "Super Emma" costume that I somehow did not get a picture of.  (In my defense, she took it off by the party, getting tired of tripping on her blanket cape.)

My first concern was the cake.  I have a Wilton Batman pan and have made Brendan a Batman cake with it, so I felt he needed something bigger and better.  I asked him what kind of cake he wanted, but he told me to make what I wanted.  So after much internet searching, I was inspired by this Cakes Infinity cake and made my own little version.  The top two tiers are pumpkin spice cake with cinnamon buttercream filling.  The bottom tier is chocolate chocolate chip cake.  Vanilla buttercream frosting with marshmallow fondant decorations.  My brother-in-law told me, "Best cake yet!"  A pretty good endorsement!
I have also been inspired by all the beautiful tablescapes fancy party planners put on the internet and all over Pinterest, so I made a few decorations for our party table.  First, I made labels on my computer for the party beverages.  I chose four of the top Justice League Heroes and chose names and drinks to go with their hero name.  My first creation was "Flash Fizz."  Since his main color is red, I bought Jones Soda Strawberry Lime flavor and removed all the labels.  I attached the new labels voila, four bottles of Flash Fizz.  I repeated the process with "Green Lantern Soda" (Jones Soda Sour Apple),  "Batman Brew" (Guinness Draft) and "Superman Suds" (Blue Moon Beer).  After making four of each bottle, I placed them on either side of the table so everyone could see them.

Next I made my husband's initials with paper mache letters from JoAnn Fabric.  I painted them blue then used Mod Podge and some pages from an old Batman comic book to really personalize them.  (And let me tell you - first time for using Mod Podge and I love it!) 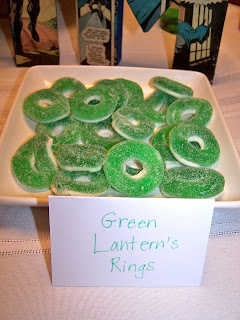 Finally, I bought some sour apple rings from my grocery store on a whim. I called them "Green Lantern's Rings" and then labelled a bowl of pretzels "Riddler's Twists."  Overall I think the table turned out really neat and I know my almost four year old nephew thought it was really cool!

Overall, it was a successful party.  My husband appreciated the fun little details and I had a great time creating them.  Now to figure out how to celebrate my 40th in about six weeks.
Posted by Heather at 9:36 PM