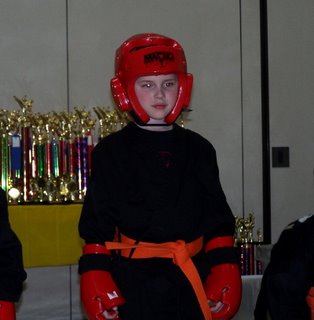 Wow! Ian has had a great two days. On Sunday he competed in his first karate tournament and won second place! Then on Monday, he tested for his green belt in karate and got it!

In the tournament he competed against other six year old orange belts and ended up with a second place trophy. He got a buy in the first rounds, then went up against a girl who was not very aggressive. He beat her 3-0. Then in the final match he went up against a boy who was excited to be competing. After an accidental kick to Ian's groin, Ian went on to score one point, to the other boy's three. He stuck through the match and really did a great job. After receiving his trophy he told Brendan and I that his trophy was very valuable to him. "It's as valuable as my Gamboy and Bunny," he said.

Then on Monday he tested forhis green belt. We were there to cheer for him as he received his next belt ranking. He was so proud, and so was I. 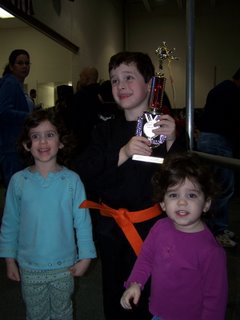 Nice blog. I will keep reading. Please take the time to visit my blog about Karate