As thousands of second graders are doing this Spring, Ian will be making his first communion in May. In preparation for this sacrament, Ian and his classmates have been studying the Bible, praying the rosary, making his first reconciliation (and second reconciliation already!). Ian is very excited to receive this sacrament and part of the process of getting ready for communion is the making of a communion banner.

When the banner materials came home a few weeks ago, I sat down with Ian to discuss what he wanted on the banner. I suggested the chalice and host, as that would be representative of his first communion. Ian thought a cross would be nice, so I sketched out a cup, host, and cross. I thought there would be space for one more item and asked Ian what he would like included. Ian suggested the Bible, and I thought it was an excellent idea as he truly loves reading the Bible. We decided his name and date shouyld be included, and I added that maybe some ribbon around the edge would look nice. When asked what color the words and ribbon should be, Ian paused, then responded with the color red. "Because it reminds me of Jesus' blood," he explained.

So, after some planning and a trip to JoAnn Fabrics, I spent a few nights tracing, cutting and gluing together Ian's communion banner. 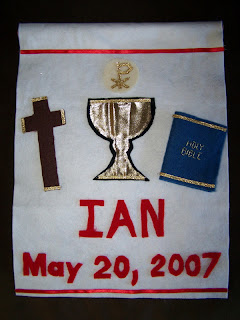 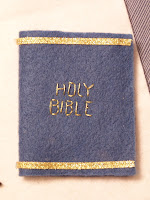 I'm proud of how it turned out, especially the Bible which I stitched the words "Holy Bible" on with gold thread.

But more importantly, Ian is happy with it. I overheard him telling Zoe, "Isn't it pretty?" I think so, and I'm glad Ian does, too.
Posted by Heather at 9:05 AM