My Baby Went To Speech Today (Or How I Went to Wal-Mart with No Kids!)

Zoe started speech class today. I was a little nervous of how she would react, because except for ballet class at the park district, Zoe has never taken any kind of class by herself. Ballet class was 1/2 hour a week and met only six times over the summer. 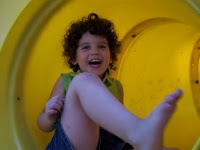 Zoe cried for the last four sessions of ballet and wouldn't even dance at the parent watch class.

So, it was with some trepidation that I dropped her off at the Early Childhood Learning Center for one hour of speech with Miss Jan. I had been talking it up since her orientation last Thursday morning. She was excited to pick out her very own backpack, just like her big brother and sister take to school everyday. (She picked out one that had Princess Aurora, Belle and Cinderella on it, but the clincher for Zoe was that it came with a lunch box and wallet.) I hadn't had a chance to get her few other supplies that she needed, so this morning after dropping off the kids at school, we stopped at Target to get her four glue sticks, a box of tissues, and white index cards. She was thrilled with getting her supplies and eagerly watched as I placed each item into her backpack.

After a quick shower for me, I came downstairs to check on Zoe. Her Winnie the Pooh show was ending and we talked a little more about speech class. When it was finally time to go, she fussed a little but got into the van fairly easily.

When we got to the school, we got out and went into the lobby to wait for Miss Jan. Zoe played on the blue dinosaur there and made sure her backpack stayed on. She asked me a few times if I was coming with her, and I explained that Mommies don't go to the classroom. When her teacher came to pick her up, we found out that there are four kids in her group, three girls and one boy. She looked back at me with those green-brown eyes and waved goodbye as she took Miss Jan's hand. She did awesome, and I was so proud of her.

While Zoe was in speech class, I raced down the road to the brand new Super Wal-Mart and proceeded to buy everything on my list, plus several other things. Without any kids, I can be a fast shopper! I kept a close eye on my watch and was back at the school about 7 minutes before pick up. 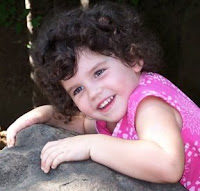 When Zoe came out and saw me she talked a mile a minute. Miss Jan said that was the most she talked all class. Zoe did well, but got a little choked up now and then about Mommy, but then got over it. According to her teacher, she also didn't play with the other kids or toys, but she handled the situation. If you listened to Zoe tell it, you would think the teacher and Zoe were in different classrooms. Zoe told me she made lots of friends, that Miss Jan was her favorite teacher, she played with the toys, and that she didn't cry and did such a good job. She told me a lot more, too, but due to her rapid rate and being in the car, I just couldn't understand a lot of it. (The reason she's in speech!)

Anyways, it was a great first day from both Zoe's and my perspective.
Posted by Heather at 1:29 PM