My Son and Hugh Hefner

Ian took a shower this morning and when the water turned off, I opened the bathroom door holding up a brand new bathrobe for him. He has never had a bathrobe and I was saving this one for Christmas until I realized I'd have to buy some clothing item for each of the girls, and they need more clothes like I need a hole in my head, so I just decided to give it to him.

He poked his head out from behind the shower curtain and squealed with delight, "A bathrobe!" He immediately got out of the shower, dried himself off, and put on his new bathrobe. He walked down the hall to his bedroom, admiring how warm and soft his new robe is. 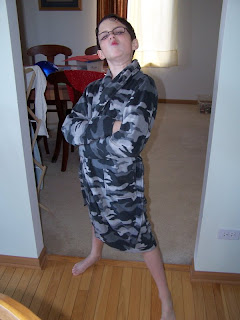 A few minutes later he appeared downstairs in his new robe, and only his robe if you get my drift. He strutted around the first floor and occasionally his sisters and I were flashed with boy bits that none of us wanted to see! That is when I sent him upstairs to either get dressed, or at least put some underwear on. Two minutes later he was back downstairs wearing his robe still. He opted for the underwear option. He spent the next hour and a half in his robe until I finally told him he would have to get dressed before lunch.

I'm not sure I'll ever understand boys!
Posted by Heather at 10:42 PM