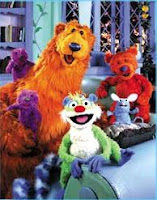 It's funny how in just a few years the popular preschool kids shows change significantly. My oldest, a nine year old now, loved Playhouse Disney. One of his particular favorites was Bear in the Big Blue House. It was one of my favorites, too. We watched Barney, Blue's Clues, and Roley Poley Olie, but Bear was my favorite because it was just downright entertaining. Ojo, the little girl bear, was cute. Treelo was unintelligible. Tutter the mouse was high strung, but likable. Pip and Pop, the two purple otters, were hilarious. Shadow told interesting stories. And of course Bear was the voice of reason. The songs were always catchy and fun to sing, enough so that we bought a CD for Ian to listen to when we went places in the car. There was usually a moral or lesson to be learned, but it wasn't preachy or overly sentimental. Really the show was just good clean fun.

I now have a four year old daughter who pretty much missed out on Bear in the Big Blue House. She loves Dora, Sid the Science Kid, Handy Manny, and the Imagination Movers. And those are all good shows, but none compares to Bear. Bear never made me want to cover my ears with earmuffs to drown out the sound from the TV, but instead made me want to sit down and watch it with my kid.

When we were at the library yesterday, Zoe found a "Potty Time With Bear" DVD. We checked it out and she watched it this afternoon. I was immediately reminded why I love this show. It's for songs like the one entitled, "Toileteer." Zoe has been potty trained for over two years now. She doesn't need a DVD to help her to learn to use the potty. But that's what is so great about even this episode. Even if you know how to use the potty, it's still just a fun episode. If you get the chance, watch the video. Pip and Pop show up to talk about being a Toileteer at about the 1:20 mark. And the song starts at about the 2:00 minute mark. It is worth it if you've never seen it before. And if you have, it's a fun trip down memory lane. Maybe you'll even be humming the song tomorrow. It's that good.

Hi Heather! I've missed you! I remember "Bear" very well. My oldest daughter (now 12) really liked Molly and the Big Comfy Couch, Little Bear, Franklin & and believe it or not, Tellie Tubbies. I always enjoyed the kids shows, as they always had a lesson with it. The You Tube video was cute. I will have to tell my sister about it who is currently trying to potty train her 2 year old!

Aaron's a huge fan of Super Why. And all the cartoons about things exploding that I won't let him watch.

I miss Bear in the Big Blue House so much! Boo was crazy about it! My son is really into the NickJr shows now- like Wonder Pets.