How was your weekend? Ours was busy, but fun. You know, the kind of busy that is good.

On Thursday, Emma, my 6 1/2 year old, had her first friend sleepover. They got to stay up until 10:15 and slept in sleeping bags on the floor. Anna had an Ariel sleeping bag while Emma used her cheerleader Barbie sleeping bag. They watched Ice Princess and had ice cream sandwiches for a treat.

The next morning Anna's mom came with her big brother and little sister and the kids played for another couple of hours while the moms chatted. It was a great way to spend a day off from school! 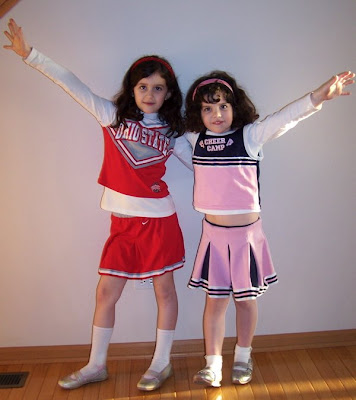 Then on Saturday Emma had a birthday party in the afternoon. While she was at the party I made giant half and half chocolate chip cookies to serve as dessert at that night's Daddy Daughter dance at my kids' school. Both Emma and Zoe went with Brendan this year and had a great time. The theme was sports so most of the dads wore Bears jerseys, including Brendan. Emma wore an Ohio State cheerleading outfit and Zoe wore a generic pink and blue cheerleading outfit. The reports are that the hot dog/ bratwurst/ hamburger dinner were great. There were games, dancing, and dessert, and of course the running around with the other first grade and preschool girls. 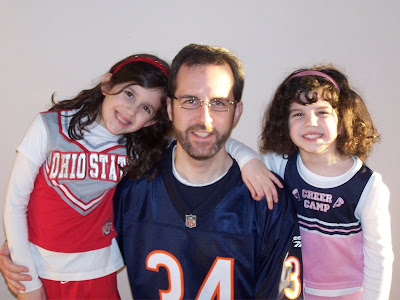 Ian and I stayed home and made a new recipe for dinner from the kids cookbook Ian got from the library. We both agreed the spicy chicken burgers were good and then we settled in for a few games of Mario Party 8 on the Wii. After Ian soundly drubbed me on the Wii, we turned on The Pink Panther movie with Steve Martin. We made popcorn and giggled at all of the silly antics of Inspector Clouseau. The girls came in just as the movie was ending at 9:00PM and we sent everyone up to bed.

Sunday brought church and play practice. It was a good weekend.
Posted by Heather at 1:21 PM

You have to express more your opinion to attract more readers, because just a video or plain text without any personal approach is not that valuable. But it is just form my point of view