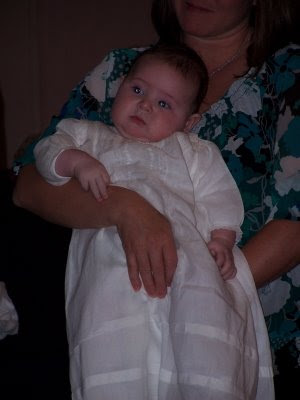 My newest nephew, Declan, was baptized this Sunday. The ceremony was held in a lovely old chapel with wooden floors and beautiful stained glass windows. The remarkable part was that Declan was the only child baptized that day. All three of my kids had several other children and families baptized on the same day they did. But Declan's was relaxed and personal and the old deacon who performed the ceremony was great with children. He made sure that both my three kids and three of Declan's cousins on his father's side of his family had a good view and even let them help him after the baptism with cleaning up and turning the font off. 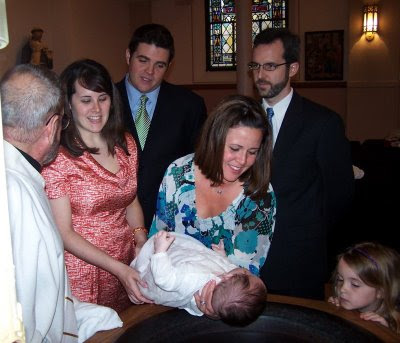 My husband, Brendan, was godfather. It was fun to watch him light the candle and hold Declan in the pictures afterwards. A cool little aside - the beautiful baptismal gown Declan is wearing was originally his great grandfather's. He wore it, my mother-in-law was baptized in it, as well as my husband and his brother and sister (Declan's mom), and all three of my kids.

The party at my mother-in-law's house was a lot of fun. My brother-in-law's family is lots of fun, and I always enjoy my husband's family. Zoe made friends with the Coffey cousins and spent the entire day running around with them. She has arranged a playdate for an unspecified later date.

I played my usual role, which was to make the cake. I love doing that. I spent a lot of time online looking at other people's cakes for baptisms and first communions, trying to get some inspiration. But, it was a cross that I found at a Christian Bookstore that gave me my final idea for Declan's cake. I bought it as part of Declan's gift and used it as the cake topper for the cake. It is a two-sided cross with a little baby in jammies holding a blankie. On each side is a prayer, one for the morning and one for the night. The jammies have tiny little stars on them. When I saw them, I knew Declan's cake would have to have stars. This is what I made: 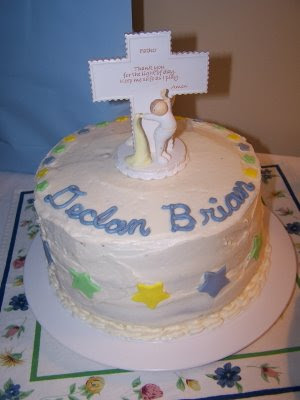 It was a huge four layered 9-inch cake. It was chocolate frosted with vanilla buttercream. I made marshmallow fondant stars to encircle the top and sides of the cake. Both the cake and the frosting are made from scratch. The cake recipe is a Martha Stewart recipe - a real keeper! The buttercream is Wilton's recipe. 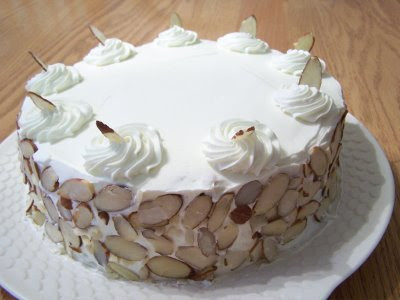 As I wasn't sure if this would be enough cake, I made a second, smaller cake. I made another Martha Stewart recipe, and it turned out fabulous. It was a vanilla cake that I brushed with an Amaretto simple syrup. The frosting was an Almond Swiss Buttercream. It was the first time I made a cooked frosting and I must admit it turned out great. I have long been intimidated by cooked frostings, but with my trusty Kitchenaid stand mixer and my candy thermometer, the frosting turned out really good. What amazed me most was that the frosting for just one cake took three (3!) sticks of butter. That's a lot of butter. But it was good. I decided to coat the sides with sliced almonds. The cake turned out really dense, but really good. 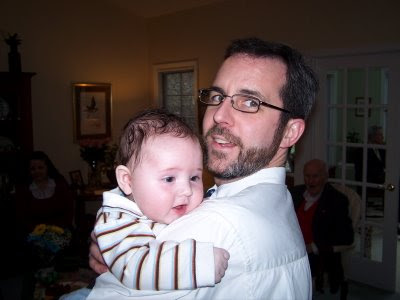 This is the godfather with his godson. They're both pretty cute, don't ya think?
Posted by Heather at 9:22 PM

Very nice. Best wishes for Declan as he continues to grow in his Christian faith.

What a beautiful baby! Looks like it was wonderful, and cakes look yummy as usual!