Another scone recipe? That is the question you may be asking yourself. First of all let me tell you I have become somewhat obsessed with scones. I think they get a bad rap, mainly because people are not eating good homemade scones, but dry, hard as rocks scones from the grocery store bakery. And this may not be my last scone recipe this year. I made a new recipe for one today, but haven't tried it yet. After they are baked and tasted, I'll let you know whether you might be seeing it later. But these pumpkin scones? These are yummy! I had to fool around with the original recipe a little, and the end result is a scone that is so good you'll want at least two to dip in your coffee or tea!

One more thing - if you end up loving making and eating scones as much as my family and I do, you can make a variety, freeze them before baking, then bake them all on one morning and have everyone's favorite! 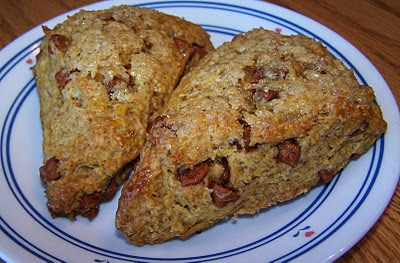 Mix together flour, sugar, spices, baking powder, baking soda and salt in a large bowl. Grate butter into flour mixture using the large holes of a box grater. Use your fingers to work the butter into the flour (mixture should resemble coarse meal or crumbs). Stir in cinnamon chips.

In a separate bowl mix together the buttermilk, pumpkin, and vanilla. Using a fork, stir pumpkin mixture into flour mixture until large dough clumps form. Use your hands to press the dough against the bowl into a ball. (The dough will be sticky in places, and there may not seem to be enough liquid at first, but as you press the dough will come together.)

On a lightly floured pastry cloth (or other lightly floured surface) gently pat dough into a circle about 1 inch thick. Using a sharp knife cut into eight equal sized wedges. Place on cookie sheet lined with parchment paper. Brush with egg wash (one egg yolk mixed with 1 T. half and half or cream) and sprinkle with sanding sugar. Bake at 375ºF for 15 minutes and lightly browned or a toothpick comes out clean.


Notes: Cinnamon chips are very hard to find. Hershey's makes them and I think they may only come out at holiday baking time. If you can't find any, don't worry. You can make these scones without them, or substitute white chocolate chips, chocolate chips, or pecans for the cinnamon chips. As with any scones, do not overwork the dough. The dough should look somewhat ragged edged and there should be small butter clumps visible throughout.

A make ahead tip: After cutting into wedges and placing on parchment lined cookie sheet, freeze until hard, about one hour. Then transfer to a plastic bag for up to 3 weeks. When ready to bake, remove from freezer, brush with egg wash, sprinkle with sugar and bake as directed in recipe, but check after 20 minutes. DO NOT THAW!

They sound and look yummy. Have you ever made home made clotted cream to go with your scones?

My SIL works at a popluar Tea Room in town and I have their secret recipe for clotted cream. E-mail me if you are interested in the recipe.

Alright, I think I need to stop reading these... I can feel my waistline expanding already!!!! lol