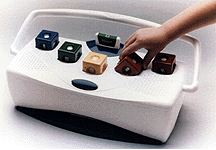 We have a nifty toy called Music Blocks by Neurosmith that we got for the kids several years ago. It only gets played with occasionally because even though it is a very cool toy, we only have one cartridge of music that it plays, rendering it somewhat repetitive after three years of play. Basically, it is a music player with five different colored blocks, and each block has the same six different shapes, one on each side of each block. When placed in order, the blocks each play a piece of some music. Each different side plays the music from a different instrument. You can play all the same instrument in order, to hear the music played by a violin, or mix it up and have several different instruments play the same piece of music. You can also change the order of the music by moving the blocks into a different order, in essence creating a whole new piece of music with the five pieces of one song.

I finally purchased two new cartridges and they arrived today. One was called Jumpin' Jive Jazz and the other was Bach. Ian played them both with gusto when he returned from school, and even got Zoe in on the action, too, by dancing around the living room with her and changing the cartridge each time she asked him to. It was very cute and fun to see them interacting so sweetly together. Ian liked the jazz cartridge right away. He noticed that the Bach cartridge was classical music, like the original Mozart cartridge that we have. This is how he told me:

Ian - "Mom! The Batch is classical music, too!"

Ian - "Hey, Zoe really likes the Batch, too! She is dancing like crazy to it. These are both cool. I like the Jazz and the Batch. Thanks for getting them, Mom."