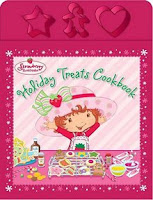 For Christmas this year one of my sister's kids had Zoe's name. So Leanne bought Zoe some cool things for her gift. There was a princess Barbie that could turn into a bride Barbie, two Strawberry Shortcake DVD's, and a Strawberry Shortcake Cookbook with three cookie cutters. Zoe immediately became enthralled with the cookbook, looking through each page and deciding whether or not she was going to make each dish. She corralled several of her aunts and her Grandma at various times during the party and made them look at the cookbook with her as she described how she would make each recipe with me. 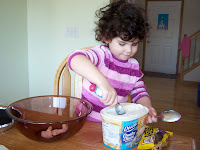 Neither my sister or I knew what a hit this cookbook would be. The Barbie didn't get opened until our return to Illinois, but the cookbook was looked over several times before that (and since!). 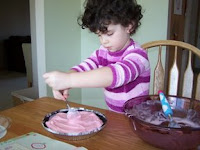 So today we finally made our first recipe from the cookbook. It was called Pink Peppermint Pie. Zoe doesn't like peppermint ice cream, though, so we substituted vanilla with some red food coloring. Zoe scooped ice cream, squeezed food coloring and stirred the mixture together until the ice cream became smooth and pink. She then transferred the pink ice cream to the chocolate cookie crust we bought at the store and smoothed out the top almost all by herself. I unwrapped two cherry candy canes leftover from Christmas and she placed them on top of the cake to look like a heart, just like in the picture from the recipe. 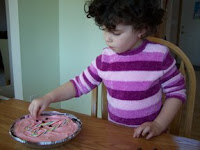 Our final touch was to add chocolate chips to the top, just for fun.

After determining that we better put the pie in the freezer or it would melt, Zoe cleaned the bowl of the leftover melted ice cream. Tonight after dinner we will enjoy Zoe's first dessert. I'm sure it will not be her last! 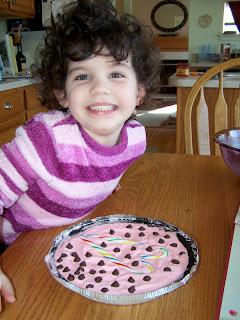 WOW!!! Does that look good!! Sometime soon, I hope I get to taste one of Zoe's deserts.

very cute...I love her curls! Reminds me of my daughter at her age. Now Cassie can make a complete meal including dessert all by herself!! Foster Zoe's enthusiasm...she may make you dinner one day!!