Why We Can't Have Anything Nice, Part 2

Back in August I explained how my kids pulled the door off of our entertainment center. Luckily, my handy husband was able to glue it back together and today it looks no worse for the wear. Fast forward to this morning. I am brushing my teeth when my youngest comes in and explains that she didn't do it, but that she was trying to throw the towel up and it broke. OK, something broke, not a new occurrence at my house. Then I get worried. She was trying to throw it up, but it broke. That's what she said. What could she be trying to throw up to put on something. Then it occurs to me. The towel bar in the kids bathroom. 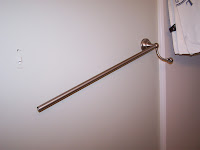 I rinse off my toothbrush and head to the kids' bathroom. There is my middle daughter preparing to brush her teeth like nothing has happened. The only problem is that behind her is the towel bar hanging precariously out of the wall on one end, with towels still half attached to the bar. I calmly ask what happened. Emma explains that she was just throwing the towel up to put it on the rack when it all came crashing down. Riiiight. I again, calmly ask if maybe she grabbed the towel rod. She said she did.

I clean up what I can and know that someone's going to have some explaining to do tonight when my husband gets home. The worst part is that we weren't going to paint the kids bathroom because the color on the walls when we moved in miraculously matched well with the shower curtain and towels I had bought before we moved in. Now, Brendan's going to have to patch the walls with some spackle, re-anchor the screws for the towel bar, and reset it all. That's going to need a little paint touch up, I think. The second worst part is that my poor husband has to live with this not only from the kids, but from me, too. In the past four months I have broken the passenger side mirror on our van, broken off the plastic piece that covers the flash on our digital camera, broken a snowman mug, and almost broke our garbage disposal. Like mother, like daughter I guess.
Posted by Heather at 2:10 PM

Heather, I have enjoyed poking around your blog today!! You parent like I do..I will definitely be back!!