I was at the post office yesterday buying stamps to mail some letters to some friends as well as some bills. I bought some pretty flower stamps for the cards to my two friends and asked for a book of Forever stamps for the bills. Then out of the corner of my eye I saw the Marvel Super Hero stamps and impulsively asked the teller to throw a book of those into my order as well. I hadn't really looked at them, but having two comic book lovers in my house, I thought they'd be fun. And they are fun, but they suck, too. 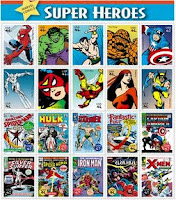 See, my husband is a DC comics fan. His favorite character is Batman, but he reads a wide variety of comic titles. Because of his interest in comics, I have learned a lot about superheroes that prior to marrying him I knew very little about. I have used this knowledge to impress mostly fourth graders who were my students when I used to be a teacher in my former life. I used comic books to teach a whole lesson on the proper use of quotation marks. I spent an afternoon (okay, 15 minutes) discussing who would win in a showdown between Batman and Superman. I even impressed a few of the more well read kids with my knowledge of the names of the three Robins. But through all this I learned that the main difference between a DC hero and a Marvel hero was that Marvel relied heavily on mutants, while DC developed their characters from many varied backgrounds.

So why do I think the Marvel stamps suck? They put two female characters on the sheet, neither of them big stars. They're just there because if they put all men someone would bitch and moan that they didn't use any female characters. The first character is Spider Woman. Spider Woman? Who has ever heard of her besides comic book geeks? I mean seriously, no one knows Spider Woman. The other character was Elektra, and I don't think anyone had heard of her until Jennifer Garner played her in the "Daredevil" movie. DC has Wonder Woman, who clearly stands on her own as a well known superhero and as someone I'd want to see on a postage stamp. On the DC stamps they also used Supergirl, who I know wouldn't exist without Superman, but again, at least people know her. They didn't use but could have also made a Bat Girl stamp, also a better known character than either Spider Woman or Elektra. 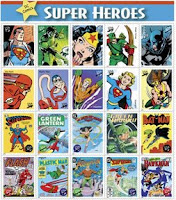 Then lets look at the other players on the stamps. Most are fairly big names, well known guys until my eyes fell upon The Sub-Mariner. Who? This guy is a big super hero and deserves a stamp? Really? There was not one other Marvel hero they could have picked that someone who is not a comic geek would know? In this stamp contest DC wins hands down, and not just because my husband has a framed set of the DC heroes stamps over his dresser.
Posted by Heather at 1:41 PM