My now four year old daughter wanted a Batman cake for her birthday. I have always made my kids cakes, as per their request, so Zoe's choice this year was no different. In fact, I was pretty excited about it. It's not often a little girl picks a superhero for her birthday theme, so after I was sure that she really wanted Batman decided to make my own invitations as well as the cake, of course. 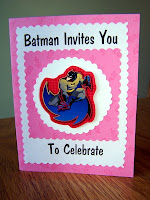 My first thought was that I wanted the invitation to be as girly as possible, but to include Batman. After several failed attempts to find Batman stickers depicting the old Batman (the one I grew up with, or at least not the newer stylized "The Batman".) Unfortunately I had no luck with that, but found some neat "Tha Batman" confetti at my party store and decided to use that on her card. The results were a pink and white scalloped card with Batman in the middle. I was really happy with how they turned out.

After completing the invitations I focused on the cake. I had several ideas of how I might make the cake when I decided to search eBay. Sure enough, there was a great pan from 1977 of Batman complete with faceplate. I won the auction and eagerly awaited the pan's arrival. When it got here I knew I had made the right decision in buying it. It was in perfect condition, although the faceplate was faded somewhat.

Two days before the party I baked the cake. Zoe helped me mix and 30 minutes after putting the batter into the well greased and floured pan, it was done and ready to be unmolded. I flipped it over onto the foil covered cake board and it unmolded perfectly. As it cooled I whipped up another cake that I baked in two 8-inch round pans. Brendan and I had decided that since his brother's and sister's birthdays were so close to Zoe's that we should surprise them with a cake of their own. We decided to keep it in the Batman theme, so they would match Zoe's cake nicely. 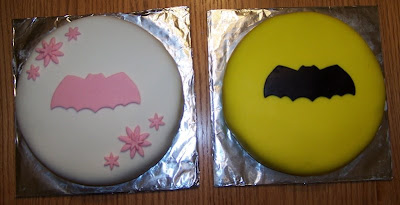 I made lemon buttercream frosting for the two round cakes and frosted each one. I then rolled out my marshmallow fondant I had made the night before, white for Elizabeth's cake and yellow for Kevin's cake. The cakes covered flawlessly and were ready to be decorated. I had a bat cookie cutter for Halloween that worked perfectly for the bat symbol. I cut a pink fondant bat for the white cake and a black fondant bat for the yellow cake. After placing them I felt the white cake needed to be girlied up a bit, (and I wanted to try some new flower fondant cutters I had gotten) so I made some pink flowers and added them to Elizabeth's cake. I loved the results. 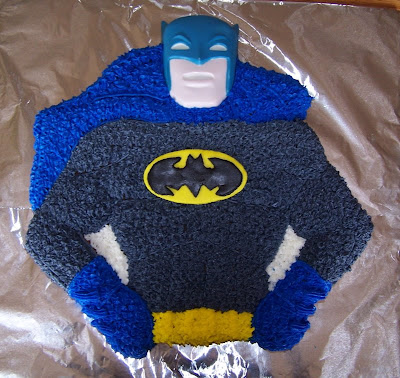 The next morning I made my vanilla buttercream frosting for Zoe's cake. I made more than the directions called for because I didn't want to run out midway into decorating. I began covering the cape in royal blue stars when the girls swarmed me like gnats. After about a zillion questions on what I was doing and when was I going to switch colors and am I going to put frosting on his face, I remembered why I usually decorate their cakes at night after they are all in bed. But, I soldiered on and finished decorating Batman around lunch time. I was so happy with how it turned out, but more importantly Zoe was excited for her cake. My son told me it looked just like in a book, a huge compliment from him. My husband also loved it. He had had a similar cake as a child, and is considering asking me to make this cake for him for his birthday this year. 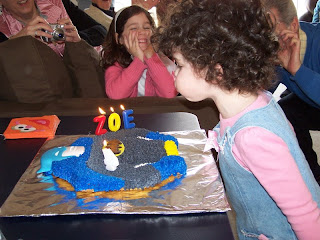 I made the chest plate the night before out of fondant and loved how it looked on the cake. I have to admit, I was pretty pleased with how the cakes turned out this year. I can't wait to find out what cake Zoe will want for her 5th birthday.
Posted by Heather at 10:59 PM

Can I have a Batman cake please?!?!

They are too cute!

Wow, I'm impressed! This turned out awesome and I can't believe the work you put into this!

I, too am impressed with your cake! I only wish that I had started browsing for cake ideas sooner. My daughter wants a batman cake for her 5th birthday.

I thought I had the only 4 year old daughter that requested a Batman cake for her birthday. I love the invitation and the cakes that you had made. They came out really well.

Hi there! I was really impressed by your cake. I also make cakes for family and friends and I would like to make a batman cake similar to yours for my grandson. How did you make the face? Is it fondant or smooth icing? I have been checking out cake pans on e-bay too!

I have never hear of marshmallow fondant...can you share the recipe?? What a great idea for the face of the cake, those star tip decorating wilton cake pan cakes, are so hard to get a face right!! Great idea!!!