Over the weekend I had the privilege of making two cakes for two different celebrations. The first was a communion cake made for a friend. She requested a marble cake. Her only requests for the decorations were a cross of some kind and her daughter's name and the words "First Holy Communion." She also wanted some pink on the cake. I decided on a fondant covered sheet cake (equalling two cakes total). I made a yellow cake from scratch and combined it with a chocolate cake, then marbled it in the pan. I then made a vanilla buttercream that I generously covered the cake with. On top of that went a layer of my homemade marshmallow fondant, then my pink fondant flowers in the shape of a cross. I added the words in pink buttercream and finished the cake with white and pink fondant balls around the bottom. It was a lot of fun to make. 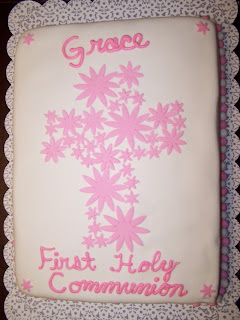 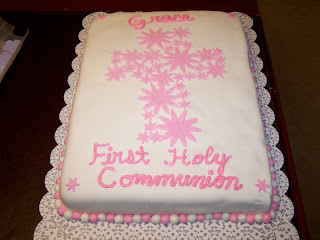 The second cake I made was for my husband's grandmother's 90th birthday. I was inspired by a variety of cakes from this cake designer, but mine didn't come out quite how I saw it in my head. I still like it, but I think the flowers around the base of the first layer are too big. The cake is a from scratch chocolate cake with homemade vanilla buttercream and then covered in my marshmallow fondant. The bottom tier is a single layer of cake, the top tier a two layer cake. I had lots of extra batter and also made 24 mini cupcakes that I forgot to take a picture of. They were frosted in pink vanilla buttercream and topped with a mini purple fondant flower. 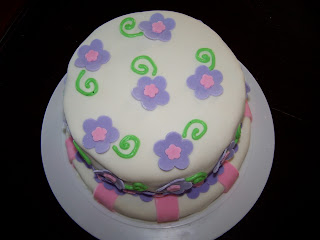 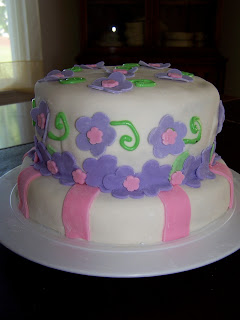 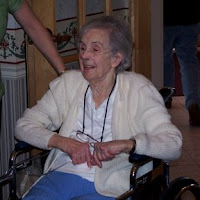 Celebrating with Grandma Van was really wonderful. Two of her grandchildren and two of her great grandchildren came a long way to celebrate with us. We are so lucky that we live close and are able to see her more frequently. It was wonderful to see the joy and surprise on her face when she saw everyone at her party.
Posted by Heather at 8:52 AM

those cakes are beautiful..how wonderful to celebrate a 90th birthday!!!