The Flip Side Of Pleasing Everyone 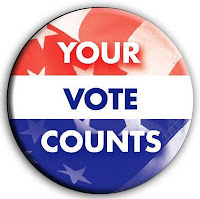 Maybe it's because my husband and I generally fall on opposite sides of the political spectrum, or because we actually voted in the primaries, but the number of calls was really out of hand. And since I am a stay at home mom, I am generally around to pick up the phone. One day it occurred to me that the fastest way out of these phone calls, besides not answering them, was to agree with whatever the caller was telling me.

"Can Candidate A count on your support on November 4th?" Absolutely!

"Will you be voting for Candidate B on election day?" Sure!

This was how the typical conversation would go. First of all, I didn't have time for most of these phone calls. Second of all, I didn't always know what the candidates were running for at the time (I did educate myself before today, but sometimes they called before my research had been done.)

I know this isn't exactly productive, but I enjoyed it.

I actually felt a little bit bad. But only a little.
Posted by Heather at 5:01 PM

Somehow this year we weren't on the phone call list.