I know, I know, this is late in coming. But I've been busy lately!

Halloween actually began on Wednesday when Zoe had her preschool party. I'm room mom and planned the party for the kids. Zoe went as a cowgirl and I think she is the cutest cowgirl in Illinois. We didn't know it, but her teachers dressed as cowgirls, too. Mrs. Voirin repeatedly introduced Zoe as "her sidekick." Zoe grinned ear to ear each time her teacher said it. We made a craft, ate some cupcakes and brownies, then ran a relay where the kids had to scoop up candy corn on a spoon, run across the room, dump the candy corn into a bowl, then run back and pass the spoon onto the next person. The kids loved it and the I had a lot of candy corn to pick up off the floor when the game was done! 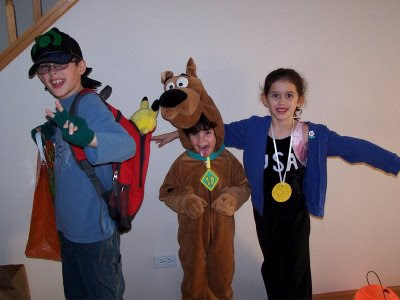 Here are my three kids getting ready to go out trick or treating with their Dad. Ian was Ash, the trainer from Pokemon. I made and sewed the symbol on his hat out of felt and cut the fingers out of the gloves for this costume. You can see Pikachu peeking out from the back of his backpack. Zoe is, of course, Scooby Doo. Emma chose Shawn Johnson of Olympic gold medal fame as her costume this year. I cut the letters U S A out of white felt and sewed them to her gymnastics suit. Then I cut a circle out of some cardboard, painted it yellow and sprinkled gold glitter all over it. After punching a hole in it and stringing white ribbon through it, she had a gold medal. The final touches were a ponytail and make-up and cheek glitter.

Here is each one on there own. 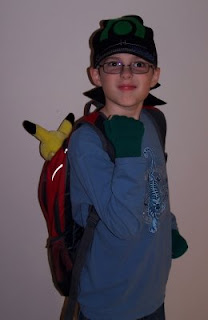 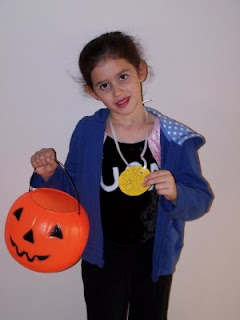 I think my favorite part of the costumes this year was that they cost me all of $1.50! The gloves for Ian's costume and the blue bandanna for Zoe's cowgirl costume were the only things I had to buy. Everything else I had in the house somewhere. (Zoe wore the Scooby costume last year, too!) I did however have to spend a few nights hand sewing the USA onto Emma's costume and the Pokemon symbol onto Ian's hat. But, I love that their costumes were unique and exactly what they wanted to be. No princesses or Darth Vader's for me this year!

I'm also realizing that I love the set-up we have for the annual trick or treat fest. Brendan has always taken the kids out, and I've always passed out the candy. I saw several sets of both parents going with their kids, which led me to question who is passing out candy at their house? I understand not wanting to miss any of the cool things your kids do, but I also think they need to do special things with each parent separately. And for us, this means getting candy door to door with dad. I hope my kids look back on this and remember it happily. (With Brendan working in the city, they get to do loads of things with me. Doing something with Dad is extra special.) Besides, I really like the hour or so to myself in the house while the four of them are all out gathering goodies. I've come to find it relaxing and equally exciting to hear their stories when they get back and dump all their candy on the floor. It's a good set-up.

Hope your Halloween was as much fun as ours was!
Posted by Heather at 5:00 AM

Your kids are so stinking cute! I love Halloween.

we have the same halloween set up in our house, and I love just as much as you do.

Very clever costumes! Luv the Johnson one! =) Luv the relay race too! I miss the young days of those kinds of activities. Treasure and store them up, because before you know it, they are gone.

Now do tell, do tell! Where those the only candies you bought? =)