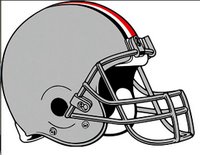 The Buckeyes did it! They beat the Fighting Irish of Notre Dame and won yet another Fiesta Bowl title. I have to admit, I am very happy they beat my husband's favorite team, not because they are his favorite team, but because OSU is my favorite team. Most other times I root for ND, as long as they aren't playing the Bucks. And seeing as this is only the fifth time the two teams have played, there usually isn't a big rivalry in the house.

Ian ended up rooting for Notre Dame, even though he claimed he didn't know which team to pull for and also claimed he wanted to root for the winning team. Despite his "Boo Buckeyes" throughout the game, I forgive him. I think what really caused the move towards the Irish for him was that I was very vocally cheering on the Buckeyes. I never said anything disparaging about ND, but I did loudly cheer on the Buckeyes when they made a great offensive or defensive play, and moaned pretty loudly too when the Bucks screwed up.

I picked up the Daily Herald today and read all four articles they wrote about the game. I don't usually read the sports section, and especially don't read multiple articles about a game I watched. But as I read the first article, I just wanted to read more and more of what the writer's had to say, especially since they have a true slant towards Notre Dame. One of my favorite quotes was written by Adam Rittenberg and was this:

With a chance to authenticate its return to college football's elite club, No. 5 Notre Dame lost to a team that owns a lifetime membership.

I think that quote pretty much sums it up. It was great game to watch if you were a Buckeye fan.
Posted by Heather at 1:45 PM

What a great quote, well said! It's nice to see a Buckeye over there in Il.! I have the honor of representing the Buckeyes in Michigan and what a thrill that has been since Tressell has taken over!

P.S. It's even nicer having a conservative Buckeye friend!!!