Save Your Toilet Paper Tubes

So both my girls were home sick yesterday. Zoe had a low grade fever and Emma had a nasty cough. But they were both playing together and having a lot of fun. As I finished straightening my hair in my bathroom I looked in the cabinet under my sink and decided it was time to clean a few things out. The easiest thing to get rid of that took up a lot of space was the 20 or so empty toilet paper and paper towel tubes I was saving for an art project with Emma's kindergarten class that never panned out.

Knowing my two girls would LOVE this treasure trove of garbage, I packed them into a bag and went into their room where they were playing cats. I asked if they would like the bag of tubes and they enthusiastically shouted, "Yes."

I went back to organizing when Emma burst into the bathroom with a toilet paper tube around a paper towel tube. She told me that if she squeezed the outer tube and moved it up and down, it made a neat sound, like and instrument. She then detailed for me how she was going to make a bunch of other instruments. She ran off happily thinking of all the things she could do with over 20 toilet paper tubes. 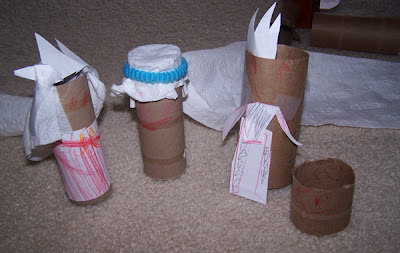 About a minute or two later she burst in again with a paper towel tube in hand, with one end covered in toilet paper. I suggested that if she used a rubber band the toilet paper would stay in place for her to create more. We couldn't find any rubber bands and decided that hair bands would work just as well.

Next thing I know Emma has drawn a face on her paper towel invention and declares that it is a boy. Zoe wants one, too, and so we wrap more toilet paper around another tube, but it has to be a girl, with long toilet paper hair this time. Emma forgets all about the musical instruments and makes several more toilet tube people, including a baby named Madeline by cutting a tube in half. She draws clothes and crowns on paper, cuts them out, and tapes them to her tube people. She even makes a tower for the princess to be stuck in, a TV, and various food and utensils to eat the food with. 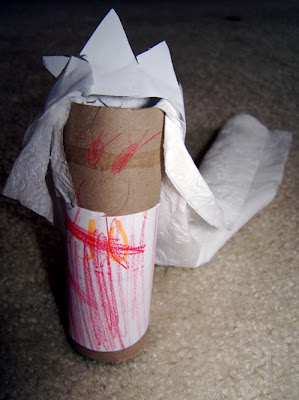 I was both amazed and amused by all the creativity oozing out of my girls. Not only that, but this activity which involved very little of my help took up 1 1/2 to 2 hours of the morning. The girls were getting along wonderfully, and having a ball playing with their new "toys."

I guess I better get busy saving some other garbage for a rainy day, who knows what they'll do with it?
Posted by Heather at 2:02 PM

Yes, we are so poor our kids play with garbage.

Those are awesome!! I love art with recycled materials!! Yes, I am a Girl Scout Leader!!