Yesterday was my anniversary. Thirteen years ago we got married in my hometown of Findlay, Ohio and started on an amazing journey together. Brendan is my college sweetheart. I met him the second weekend of our freshman year at John Carroll University. We started dating later that month and by our junior year we were engaged. Three short weeks after graduating, we tied the knot.

Brendan and I before the winter dance 1993 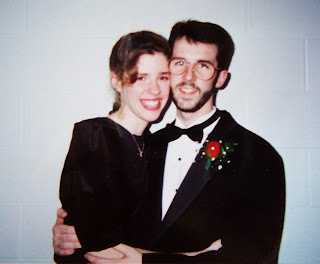 Looking back I am sometimes amazed at what we've done. I didn't have a job (well, I had a summer job in the financial aid office at JCU, but no permanent job.) Brendan was starting his job working nights at a little internet startup company the Monday after we got married. They say you can't live on love alone, but we came close! 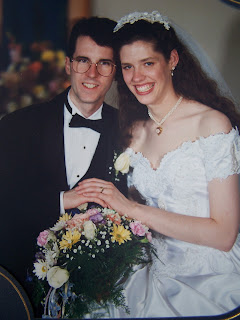 I still remember his reaction when he came home that Monday night and I had made tacos and corn for dinner. It was like he had hit the jackpot. Walk in the door and food was there, on the table to eat. It was the beginning of a very traditional marriage in the roles we took. I grocery shopped and made dinners. He washed the dishes. But outside of that we weren't very traditional. He helped clean and do laundry. He accepted the cat I had picked up on my way to work in the fall; she had been hit by a car. I searched for our second apartment. I helped mow the grass when we bought our first house. He planted roses and made sure they were fertilized regularly. I marinated the meat, he grilled it on his Weber grill.

Then after four years of me teaching, him moving to days and changing jobs twice, we had our first child, a son. I stopped working to take care of our baby and Brendan looked for job he would actually enjoy after the internet company was sold. We moved to the Chicago area when our son was about five months old. We lived with my father-in-law and his wife for four months until we found a place of our own here. One miscarriage, two more kids (daughters), and eight years later we find ourselves in yet another house (our third since getting married) and celebrating our 13th anniversary.

It's been a long and wonderful ride. We've seen so many changes, but one thing has remained the same. Our love for each other. It has remained steadfast and true.
Posted by Heather at 6:00 PM