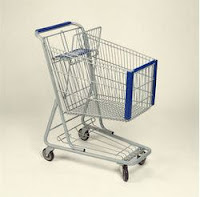 In the past, if I wanted to go grocery shopping for my weekly trip, I would rather gnaw my arm off than take my three kids with me. I planned it around their being in school or other activities. I often shopped at night after they'd gone to bed. If I couldn't do that, and I absolutely had to go to the store with all three of them, I'd usually only get the necessities and either bring snacks or bribe them with a doughnut.

But this summer is different. My kids are older and I have realized I don't want to give up "my time" in the evening after the kids go to bed. I have taken them with me several times now, and it usually goes pretty well. Now, they do get a little silly sometimes, but mostly because they are just keeping themselves occupied by having fun with each other. That's not to say that their behavior is always appropriate, twice today they had to all stand next to the cart with their hands on the cart so they wouldn't be jumping around in front of other people and generally making me frazzled while I looked for dishwasher detergent. But when I think of their behavior, they're not being rude or mean, disrespectful or even difficult. They rarely complain when I say "no" to their requests (they're used to it, I must say it often!) and they usually keep up with me in the store. They're mainly just unaware of how their behavior affects the other patrons of the store, which I see as immaturity, not mischief. And I do correct them and have them apologize if they are obstructing someone's path or doing something else that causes problems. It actually is a pretty good trip now when we go to the store.

And despite the fact that I could probably get it done so much faster without them, I don't really mind it that much anymore. Except for one thing. I cannot leave the store without a few things that were not on my list and I probably wouldn't buy if they weren't with me. Last week it was a package of Little Debbie's Swiss Rolls and Nutty Bars. This week it was Pepperidge Farm Brown Sugar and Cinnamon Mini Bagels. But, if that is the only roadblock I face each week, I think I'll choose going with the kids during the day instead of by myself at night.
Posted by Heather at 3:33 PM

oh, I love Little Debbie's Swiss Rolls.. And zebra cakes. They will be the end of me.

lol I thought I was the only one who grocery shopped at night.

I agree with you. My kids were the same way in the store. Because they are both in school now, or my oldest can babysit for an hour or so, I rarely take them to the store anymore. Yesterday I took my son with me and I forgot how fun it was to shop with him, in a good way, we laughed, he helped me,it was great....one day you will feel the same way, I promise!!