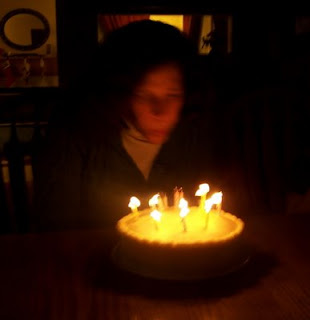 Okay, you caught me. I'm not actually 33. I'm really 36 today. But it made my title rhyme, which I really liked.

I had the birthday that I think is fitting for a 36 year old stay-at-home mom of three rugrats. My morning started off well enough when my kids let me sleep in until 7:30 AM. I wandered downstairs with my 9 year old son and my 6 year old daughter and was immediately bombarded with inquiries into playing the Wii. I acquiesced and was soon watching my son battle thugs and others as Indiana Jones on our family room TV. My daughter snuggled up next to me and about 15 minutes later my 4 year old daughter found her way downstairs. A request was made for a green bar (a Nutri Grain bar) just as I excused myself to use the bathroom. I told my four year old that I thought they were on a high shelf, but she could try to get them if she wanted to.

After washing my hands my son told me he had slipped and hurt his knee. Usual stuff, he was still walking, wasn't too concerned. Then I walked into the kitchen and slipped. I looked down to see what was making the floor slippery. I couldn't really see very much until I took a closer look. There in a huge pool on the floor was my essentially full bottle of olive oil on it's side, and oil EVERYWHERE. I tried to think quickly and finally decided I needed a towel from the laundry room to mop up the oil. I asked Ian if he knew what happened. He said he didn't know. It was then that I noticed that Zoe, my four year old, was nowhere to be found. I asked Ian if Zoe had spilled the bottle. Ian of course didn't know because he had been playing the Wii at that time, thus his brain could not observe anything except how many lego studs Indiana Jones had collected. After cleaning up the oil with the towel, scrubbing the area with Murphy's oil soap and water, then washing all the towels used to clean up the mess, I went to find Zoe. She was hiding under her covers on her bed. She was so upset, and afraid I was angry at her. I assured her I was not angry and then escorted her downstairs where she decided on a bowl of mini wheats instead of a green bar for breakfast. 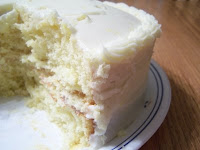 Next I made myself a lemon cake from scratch. I love lemon cake. I sifted my ingredients three times just like the recipe called for and baked it up to perfection in two 9 inch cake pans. Having never made the cake before, I wasn't sure how lemony it was (it only had lemon zest, no juice or extract). So I decided to make a lemon buttercream frosting to top the cake with. By the time I was done the cake looked very pretty. Unfortunately when we ate it after dinner, it didn't taste so good. Actually, the cake was really yummy, though not real lemony. It was the frosting that wasn't quite right. It was a little bitter and tasted odd. I think when I zested the lemon I may have gotten some of the bitter pith with the zest. I am mostly mad that I wasted 1 1/2 sticks of butter in the frosting, one that won't get eaten now. I'm contemplating scraping the frosting off and still eating the cake. Next time I'll use extract instead of real lemon zest and juice in my frosting. I think it may taste sweeter that way (and less chance for screwing it up).

After dinner and blowing out my candles on my cake, I opened my much anticipated birthday gift. I don't usually have one particular item on my list that I want more than anything else. But this year I let my husband know over and over again what I wanted. And guess what, all my subtle (and not so subtle) hinting worked! He got me the Provo Craft Cuttlebug! I can't wait to try it out. 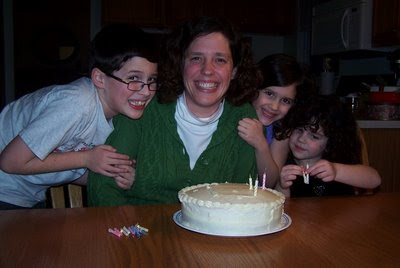 Oh yeah, my night ended with my husband and I forcing my peepee hold dancing four year old into the bathroom so she wouldn't have an accident. Apparently we were watching the wrong kid, because not more than one minute later my six year old daughter was running through the family room with wet pants yelling, "IAN MADE ME DO IT."

Yes, truly a fitting end to my 36th birthday.
Posted by Heather at 8:38 PM

Well a very HAPPY BIRTHDAY to YOU!!!!

What a day! The cake sounds yummy! I say ditch the icing and eat the cake! :o)

Glad you had a Happy Birthday!

Happy birthday heather...it sounds like it was perfect day!!!

Happy Birthday Heather!! Sounds like you are a busy mom with 3 kids! What exactly is the Provo Cuttlebug? Is it anything like the Cricut?

Happy B-Day! Sorry I missed it. I'm loving the cute pictures! I just love your Chocolate Peppermint Cake recipe, so I can't wait to try this one!