A Trip To The Periodontist

I went to the periodontist yesterday and felt compelled to share my experience here. (I know Bobbie Leigh, you have stopped reading by now, that's okay!)

The reason for my visit was the gum over my right upper front tooth (can't recall the name of the tooth. Alison, maybe you could help?) was pulling away. There was a little "u" where the gum pulled away. My dentist sent me to a periodontist because when something like that happens in the front of the mouth, a filling starts to look pretty bad. After my initial consultation it was decided that I needed "minor periodontal surgery." Basically, the doc takes a piece from the roof of my mouth and attaches it to the gum above my tooth. Yeah, eeeew. And, oooooooww. 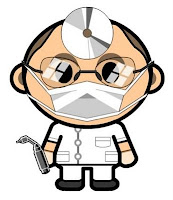 I had about three weeks to anticipate the procedure. I finally decided I would be fine. I have been having cavities filled since I was five years old. I have had at least two root canals as well as several crowns. I even had my wisdom teeth ripped out of my mouth as an adult about 6 or 7 years ago, with nothing but the numbing novacaine shots. If I can handle all of that, a trip to the periodontist should be a piece of cake, right?

And actually, it was. In fact, except for the number of shots to numb the roof of my mouth, the procedure itself was better than getting a cavity filled. There was no drilling or loud noises associated with drillings and fillings. The worst part was when he said it appeared I had a lot of bone loss under this tooth, a surprising amount. There was no pain, but I imagined what he had to do to look at the bone under the gum, and that pretty much grossed me out. I patiently laid with my mouth open and eyes closed while he sliced some flesh from the roof of my mouth and sewed it over the gum. I knew the procedure was almost over when I felt the thread he was using to sew the stitches against my upper lip. Then he was rubbing some strange goo over my gums, though I couldn't really feel it, and holding it in place for several seconds. He placed some mesh over the part in the roof of my mouth where he had taken the graft, and "cemented" it in place. After all this was done, they wiped off the outside of my mouth, which I'm assuming had blood on it. The assistant handed me a cup with four ibuprofen pills in it and a cup of water. I took all four and waited for the numbing to wear off. The doctor handed me a paper with directions for post op care and wrote me a prescription for an antibiotic and one for pain pills. Then, because he finished about ten minutes early, we sat and talked about our families, where our kids go to school, some mutual people we know. It was very funny and strange.

I walked out after paying my bill and headed to the car. I still had to pick up my kids at school. The first thing I did when I got in my car was look at my mouth. Above about three of my teeth is a white putty like substance. The dentist said it will likely fall off before I come back next week to have my stitches removed. The mesh covering on the roof of my mouth is black. My daughter, Emma, loves looking at it. My son, Ian, told me he wasn't going to make me laugh for the next week because he didn't want to see it. For my part, it's kind of novel. This morning it looks a little grosser, there is some seeping blood that has left brown streaks through the white putty. My mouth feels good, though. No pain pills yet today.

And as Irish Coffee House told me, maybe my trip to the periodontist will result in some weight loss. I think it could. I'm eating softer foods, but it takes me so long to eat that by the time I get halfway through something it is cold and unappealing. I wouldn't recommend it as a diet, but if you have to have work done, you might as well get some side benefits!
Posted by Heather at 8:07 AM

But it's like a train wreck. I just could not stop being intrigued and reading! rofl

I do hope and pray you heal quickly, swiftly and smoothly! The added bonus would be a nice pound or two lost! :o)

(I wouldn't count on any new posts from me until next week. lol I'm soooo far behind right now, it's not even funny!)

Oh you poor thing! I was feeling your pain! My dentist recommended that my 10 year old daughter see a periodontist for a possible frenectomy. She hardly had any gum tissue covering her lower labial. This is the last thing I want her to go through. Her Orthodontist recommended that it not be done just yet. We are in the process of getting her braces!

BOBBIE LEIGH HASN'T STOPPED READING! BOBBIE LEIGH SWEARS!
Bobbie Leigh hasn't had 5 freaking minutes of down time in like over a week!
I'm sorry for being so behind- if it helps, I haven't read anyones for the exception of Nikki's (Which was only twice) in over a week!
I hope you heal quickly to, that sounds wretched! Even though you are still eating brownies as I can see, you will still lose a couple of pounds at least. Feel Better!

that is actually tooth #8, a central incisor. I am sorry you had to go through this, but I am glad you did. You will be happy in the long run also. Expect the area on the roof of your mouth to be the most uncomfortable. The area above #8 probably will be almost pain free as it heals!! If you have any questions, feel free to email me.