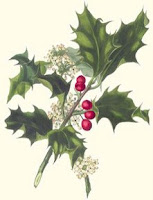 One of the perks of being a parent is being around your children as they sing Christmas songs over and over again. My five year old daughter is always singing one song or another. Lately they are mostly songs from her upcoming Christmas concert that they are practicing for on a daily basis in school. But she also shares with me her versions of Jingle Bells, Rudolph the Red-Nosed Reindeer, and my personal favorite, Deck the Halls.

The real perk, of course, is not in hearing their little voices all the time, but in the way they mangle the lines of songs. Emma's most recent rendition of Deck the Halls went something like this:

I told her it was really "Deck the halls with boughs of holly," but she wouldn't believe me! She told me she heard it, and it said, "Santa Claus is out of holly."

I may sing it that way for the rest of the season this year.
Posted by Heather at 1:04 PM