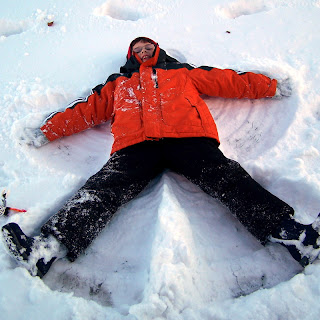 The first big snow of the season fell last night and by morning the yard was under about six inches of snow. After my kids oohed and aahed at the pretty snow, they hatched their plans for playing in the snow. My oldest was not happy that school was still in session. He stuck out his chin and defiantly told me he was going to play in the snow after school. Take that mom! 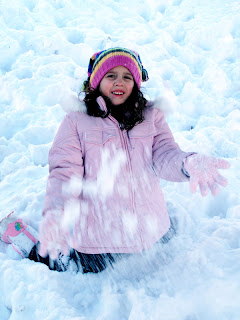 So, at around 3:00PM, Zoe and I ventured down to the basement to pull out our snow pants. I was a little worried as I pulled two pairs if snow pants and one snowsuit out of the bin they were being stored in. Ian's pair was a size 10/12. Perfect I thought. But Emma's pair (an old black set from Ian) was a 5. She currently wears a 6. Zoe's snowsuit was a size 4T. She is in 4's and 5's. I figured we could make do for today and buy new ones if need be. But, at 3:15 when Emma and Ian got home from school and tried on their snow pants, everything fit. After some snacks and a change out of their school clothes we all suited up for some fun in the snow. 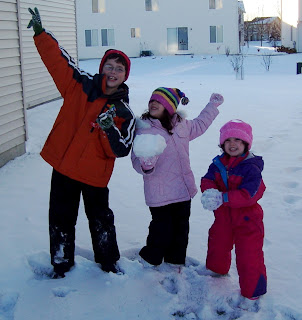 It was pretty chilly outside, but of course the three of them didn't notice it at all. They just knew they were free to dig, roll around in, and throw snow any way they could. Ian brought one of his Bionicles out and played with the neighbor boys while the girls looked for ice blocks in the snow to make a big pile with. 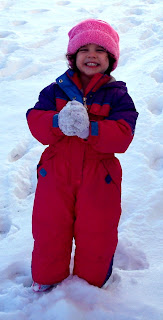 Emma got cold first and came in for a nice hot mug of cocoa. I enticed Zoe in with the promise of hot chocolate as well, and Ian finally came in when his hands couldn't stand the cold anymore. All in all, a successful first play in the snow day.
Posted by Heather at 7:16 PM

I love these photos

I think that they're great also!
What a lineup!