May Qualify Him For Uncle Of The Year

I have a brother-in-law who has many talents. He is a twice nominated Jeff actor (fifth down on the list) can do magic tricks, ride a unicycle and juggle, and he can knit, to name just a few of his many skills.

In past years we have been on the receiving end of his knitting flair. One Christmas my son received a hat, my middle daughter got a matching hat and scarf (now being utilized by my youngest daughter, who wasn't around yet at this particular Christmas), my husband (brother of the brother-in-law being presently discussed) got a scarf (and maybe a hat, not sure) and I received a beautiful scarf as well. All of these items were hand knit with love by my brother-in-law, Kevin.

Now, fast forward about four or five years. My youngest daughter requested a baby Elmo for Christmas. I wasn't sure what she meant, as I hadn't seen any in stores. Neither did Kevin. However, creative to a fault Kevin decided he would not allow my baby to go without her heart's desire, a baby Elmo.

The man knitted a diaper and baby bonnet for an Elmo he bought and gave it to Zoe. It is unbelievably cute, and obviously very unique. Zoe loves it, and so do I. 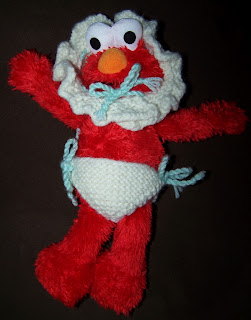 Take a look for yourself. If this doesn't qualify Kevin for Uncle of the Year, I don't know what does.
Posted by Heather at 2:56 PM