I went into Emma's kindergarten class this afternoon to teach art. The parochial school where Ian and Emma attend does not have an art teacher on staff, so the teacher is responsible for weekly art. I volunteered to teach art once a month to the kindergartners to give Emma's teacher a break and to let myself play "teacher" for a little bit each month.

Today's project was paper plate angels. I asked them if they knew of any angels that were involved in Jesus' birth. They told me about the angel Gabriel as well as the angel who told the shepherds about Jesus' birth. (They're a smart bunch!) I told them that we would make our own angels today out of paper plates. I showed them one I had made and they were all very eager to get started.

I pre-cut all the plates because kindergartners and scissors do not usually result in precise cutting, which this project required. I passed out the plates and after writing their names on them, they got started coloring and drawing. More than one boy asked if he could make a mean face on the angel. I told them, "No, this is a Christmas angel, he or she needs to look happy." However, when the same boys asked if they could make their angel bald or with spiky hair, I told them, "Sure, it's your angel."

It's amazing the difference between kids in a class. Some kids were done drawing after about two minutes, ready to move on to the next step, while others were still coloring when it was time to do the last step.

Now, if you've never been in a class of 22 kindergartners doing an art project, you might be amazed at the noise level. Kids all over the room asking me if I liked their angel, comparing what they are doing with the kid next to them, or even across the room from them. It is controlled chaos. But, it's fun. 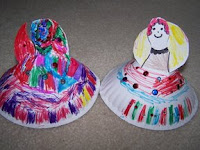 What really made it difficult for me today was that there were three distinct steps that I had to help with, as well as having Zoe, my three year old daughter with me. Usually she just colors or eats a snack, but today she wanted to make the angel and therefore wanted a little bit more of my attention than usual. Couple that with the taping and passing out of yarn to 22 five and six year olds makes for a slightly stressful situation. At one point, while I was taping each child's yarn onto the underside of their angel, Zoe came over with her angel and wanted me to do the same. I told her she would have to wait a little bit. She looked distressed, but didn't say anything and just held onto my leg. That's when the sweetest thing happened. Lucas, a little boy in Emma's class, told me he could wait until after Zoe had her angel taped. I'm often amazed at the sweetness of little kids. It always humbles me and makes me happy that I'm taking the time to do this every month.

After the angels were done, several of the kids helped me pick up the extra sequins that they had been gluing onto their angels to make it pretty. Another neat thing about this help is that two of the helpers were little boys who are known to be troublemakers. It made me really happy to see their generous spirit come out. It also reminded me that no matter how difficult and little self control some kids have, they still are sweet little kids who want to do the right thing and like being recognized for their good behavior. It's amazing how much a pat on the back can encourage more good behavior.

After I cleaned the tables so the students could have their snack, Zoe and I left amid a chorus of "Thank you, Mrs. McKillip" and "Goodbye, Mrs. McKillip." It was fun. I can't wait to make paper plate snowmen in January.
Posted by Heather at 2:05 PM