Saturday was a busy one for us. Okay, it was moderately busy for me, but my husband did a lot of work and was very productive. I went to the grocery store (by myself!, it's Saturday remember) while Brendan stayed home and began the monumental task of helping Ian clean out his room. They went through almost all of his toys and books and got rid of some stuff and agreed on which items should go downstairs to the basement. Then Brendan moved Ian's train table down to the basement which immediately made my eight year old son's room look like a big boy's room. Brendan put together a desk and a new bookshelf and Ian's room was officially transformed from little boy's room to big kid's room. It looks great though I have to admit there were (and are) a few wistful pangs in my heart as I looked around at his new room.

After all this is where the sledding comes in. The whole family suited up to go out to the sledding hill by our old house. The girls have never been sledding, so there was a lot of giddy excitement as well as nervous curiosity. I filled a thermos with hot chocolate, grabbed some chocolate chip cookies and pretzel rods, and added an extra pair of gloves for each kid to a canvas bag while Brendan loaded the van with the only two sleds we own,

a pink one I bought for a dollar at a garage sale and a Little Tikes orange kiddie sled designed mainly to pull toddlers around in the snow.

We took a quick drive out to the sledding hill, parked, and unloaded all three kids and both sleds from the van. The kids watched all the other families flying down the hill and marched a little quicker over the snow to get to the hill. We trudged up and Ian immediately took the first ride down. I suggested that Zoe try riding down in the little sled and she happily agreed. I ran down the hill in case she wiped out or otherwise needed me, but she did amazing! It was a thrill to watch her giggle with glee as she raced down the hill.

As soon as she stopped at the bottom it was, "Again! Again!" So I pulled the sled up for her and she flew down the hill over and over again until it was time to go home. She only stopped for some hot chocolate and a pretzel rod. Ian and Emma enjoyed the sledding as well, but clearly didn't want to have to take turns. I made it worse when I insisted on going down the hill once by myself. 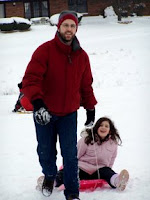 After all, it's been many years since I went sledding and wanted to get in at least one run by myself. Brendan and I each got in a few runs with the kids before it was time to go.

It was definitely a lot of fun. I think Emma summed it up best. "Can we do this again next winter?"
Posted by Heather at 6:59 AM

My son turns 8 next week and we are planning on getting rid of his train table also....it is sad...I am feeling the same pangs as you!!

Now for your question about Wales. I don't remember those cakes but I will ask my mom and get back to you!!