We Are Officially A "Webkinz" Family

The Webkinz craze has been going strong for over a year now, from what I understand. I have neighbors and friends and brothers and sisters whose kids all have Webkinz. They told me all about them and how the kids could go on the computer and take care of their Webkinz. I even had a friend log onto her computer while I was visiting and show me how her kids played on Webkinz. It looked cute, but upon hearing how the membership is good only for one year, whereupon the end of that one year you must either pay to continue using the website or buy another Webkinz, I decided I wasn't that interested. I figured my kids could jump onto the next fad.

At Christmastime, when some of my kids' aunts and uncles called for suggestions and asked about Webkinz, I explained that my kids didn't have any yet and weren't asking for any. I said they would probably enjoy it, but it wasn't something they had requested. My one sister-in-law even said to me, "Well, if they aren't asking, I'm not going to be the one to start it!" 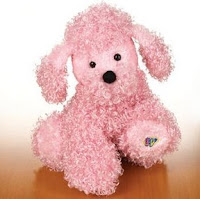 I thought we'd made it through the holidys safely (no Webkinz) when on December 29 my brother, Emma's godfather, presented her with a pink poodle Webkinz. Emma was excited because she had heard of them, but I don't think she knew what she could do with them. So when we came home from Ohio we logged her onto Webkinz and she was hooked. Before Webkinz, she played the computer very sporadically. Since Webkinz, she and her brother compete for time on the computer after school. 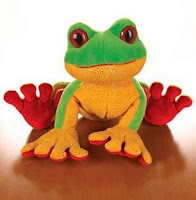 Then Ian wached Emma play with her pink poodle at Webkinz, and decided he might enjoy having one of his own. So after adding up the dollars and coins in his bank, he declared he wanted to buy himself a Webkinz. So on Superbowl Sunday (I think) he went and picked out a tree frog. He payed for it and brought it home. He couldn't log on that day due to a computer restriction, but on Monday after school he wasted no time getting online to register his tree frog. He played quite regularly initially, but eventually missed his regular websites and now plays at Webkinz a few times a week. Emma still plays almost everyday.

And soon, Zoe will be getting one for her birthday from her Aunt in Ohio. I guess Webkinz is here to stay for awhile.
Posted by Heather at 1:13 PM