I had the most amazing evening yesterday. Three days ago my father-in-law calls and tells us he has two tickets to my brother-in-law's play for Thursday night. I thought, "Great, but will we be able to get a babysitter?" And my dear husband called his mom and voila, we were going out to see a play on Thursday night! 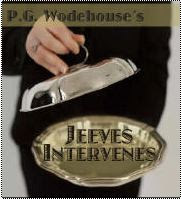 We went to the Mayslake Peabody Estate in Oakbrook for "Jeeves Intervenes," a Jeff recommended comedy. The theater is an intimate affair, seating only 52 audience members. The show itself had only six characters, and that was all it needed. As I sat watching the show, I realized how much good quality theater is out there for the taking, if only one wants to find it. The small venue was inviting and allowed for a truly up close and personal look at the actors as they played their parts.

At intermission we were discussing how it felt as though the audience was in the room with all the actors (the entire play takes place in one sitting room), like we were on a couch on the other side of the room. It's not something you can experience at the big productions. I have enjoyed many high quality large productions of plays, but this was really enjoyable in a different way. There weren't any amazing set changes, the costumes were simple and suited the story, and the story is fast paced, perfect for a smaller audience. The dialogue was witty, funny and sharp. 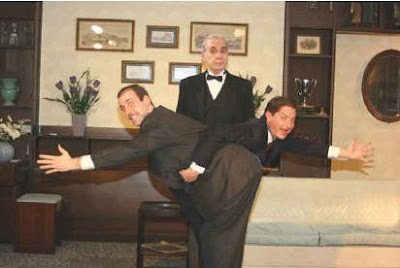 When it has been a long time since I've seen a show I forget how much I love live theater. I grew up going to shows like "Annie", "Fiddler on the Roof", "Oklahoma", and "Starlight Express", to name a few that my parents took my brothers and sister and I to as kids. Since being married, my husband and I have continued to go to shows when the budget permits, but it's been awhile. Last night reminded me again how important and fun it is that we keep going to live theater. It's something I want my kids to experience, too.

All in all, a wonderful night out, even if we did have to eat McDonald's in the car on the way.

By the way, my brother-in-law is the one on the left in the picture.
Posted by Heather at 12:42 PM

I love live theater, always have. My husband can take it or leave it....so, my daughter is now my date to productions...and she loves them as much as I do. We go into San Francisco at least once a year for a show...but we do all the local community theater shows and the high school ones. Now, both my children are involved in the local children's theater and are in the productions 3 times a year...they love it!!!