I have all kinds of great things I could talk about that happened over the last week. Sledding with my kids on Sunday, the school play tryouts where my two oldest got up in front of everyone and did their bit, all the awesome Mo Willems books we checked out of the library, the bitter cold that gave all of my kids the day off from school today.

But, I'm not going to talk about those things. I'm going to talk a little bit about my cat, Bumper. I took Bumper to the vet last week because she had been losing weight quite rapidly and also because a blood vessel burst in her eye. She is almost 14 years old and except for the frequent vomiting she has had all her life, and the diarrhea she had for close to a year wherein she almost got put to sleep. she's been an awesome cat. She is not moody or mean. She doesn't invite affection and then turn her head and bite you. She lets the kids carry her around the house and never once has even thought to bite or scratch them. She sits on my lap every night after the kids go to bed, and for most of the time we've owned her, she has slept at my feet on top of my bed. 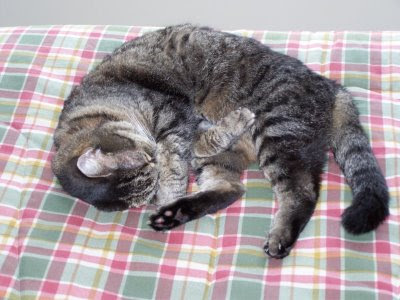 She had a rough start in life. Back in the fall of 1995, I was driving to St Ann School where I taught 1st grade. It was a short drive, probably 10-15 minutes. Cedar Road is a very busy road that leads into Cleveland if you follow it long enough. My drive was straight down Cedar Road. As I passed through a big intersection, I saw something clutching the pavement in the left turn lane going the other direction. I quickly recognized it as a cat. I immediately pulled my car over into the parking lot to the right and jumped out of my car. As I did so, I noticed a large crowd of people waiting for the bus. I heard an audible group cringe as I ran to the side of the road waiting to cross to the turn lane. A car had made a left turn and just barely missed the cat in the middle of the road. As soon as the light changed, I ran out and picked the pitiful little cat up.

I had no idea what to do next. I decided to continue on to work. I usually got there quite early to get work done before the kids came in. That day I had to figure out what to do with this injured cat. I unloaded my bookbag and left the cat in my car where she hadn't really moved except to look around since I put her on the front seat. After getting my classroom opened up, I went and got the cat and took her into the teacher's lounge to talk to my principal. Sr. Dorothy Ann was terrified of cats, a little fact I was not aware of. She stood on the other end of the lounge while we discussed what to do with the cat. We put her in an unused room of the rectory that was just outside of the school building. I then went to work.

A few hours later Sr. Erin was at my door, ready to take over my classroom. Apparently our secretary had arranged for the cat to get into a vet down the road and I needed to take her now. So I did. She had a fractured pelvis, broken paw, and an infected bite wound that needed draining. The vet's wife used to work at St. Ann's, so the vet had contacted a rescue organization that paid for all the work as long as we'd foster the cat until a home was found for her. I said, "Of course!" 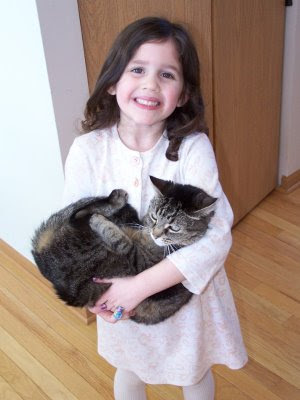 I brought her home after all the surgeries and work was done. The vet thought she was between 6 and 9 months old. We called her "Kitty" initially, so we wouldn't get attached. Riiiight. We never got a call from the rescue organization saying they found her a home. We kept her in our one bedroom apartment against our lease agreement and named her Bumper. (My husband said it was only appropriate, after all the last thing before she saw me was the bumper of a car.)

We have moved four times since I found her that fall day almost 14 years ago. She lived with my husband's grandparents for almost six months while we looked for a house in Illinois. They adored her, as we do. Everyone who has ever met her or taken care of her says she is the most amazing and sweet cat. And they are right.

UPDATE:
I took Bumper to the vet last week and then again yesterday for a weight check. They ran blood tests and took X-rays. They told me yesterday she probably had spleen cancer. I asked them how long until the inevitable. The vet said he didn't know. Take her home, feed her, give her fluids (under her skin with a needle and I.V. bag) and start talking to the kids about how she is sick.

Last night she had diarrhea and it was all down her back legs. She came over one last time to sit on my lap and I realized what was all over her. So I took her up to the bathtub upstairs and got some warm water to clean her up. She didn't even protest and looked so pitiful laying in the big white tub. I knew the end was close. I wrapped her in a white towel and snuggled with her. She couldn't purr, which she always did almost immediately as I picked her up. I laid her in her favorite spot on the couch. I scratched her chin and she lifted her head to let me do it. 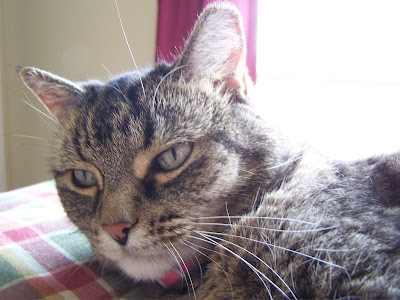 This morning she is gone. My husband found her dead on the couch. Now I have to tell the kids. They have a snow day because of the extreme cold we are experiencing in Chicago right now. I am so sad. I loved her dearly. I am glad she is no longer suffering. Goodbye, Bumper.
Posted by Heather at 6:20 AM

Oh Heather - my heart is aching for you and your family, as I know what it is like to lose a pet. I am so sorry for the loss of your dear kitty, Bumper. Thank you for sharing your heartwarming story. I am glad you have many good memories of her, as well as some great photos. Stay warm and take care.

During childhood the love of a pet can never, ever be replaced.

I'm so sorry about your kitty. It's so hard, it's losing a family member.

I'm sorry for the loss of your precious Bumper ... you'll all be in my thoughts and prayers.
Hugs and blessings,

We'll all miss Bumper. She really was a great cat. Send my best to the kids.

Oh Heather, I am so sorry. I know just what you are going through. Remember the good times and the love she gave you. She had a wonderful life. Please take care.