Psssssst. I've Got A Secret

Hi. I've got a secret. I went to the library today and picked up a book I put on reserve last week. I've started reading it already. I'm enjoying it, even though it is not the best written book I've ever read. I've been wanting to read this book for a while, since I saw it advertised several months ago. But, I didn't want to buy it, and I didn't really want anyone to know I wanted to read it. Then it hit me. The library. I can get it for free and read it and enjoy it. So I did get it, today. 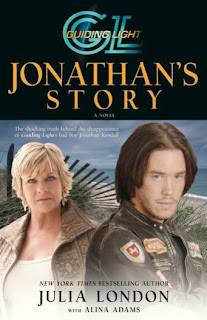 The book? It's called "Jonathan's Story" and its about some characters from a soap opera I've watched on and off since 7th grade. I starting watching Guiding Light back in 1985, and have followed it loosely ever since. I don't watch it in it's entirety ever, because it just doesn't fit into my shcedule. But, I watch enough bits and pieces to know whats happening, and I watched enough to see this book advertised at the end of the episodes.

At first I thought, "Who would want that?" And, "Who would spend money on that?" But then it started to grow on me. I wanted it. Me.

But here's my problem. My husband. He reads voraciously. He reads authors like Gabriel Garcia Marquez and Michael Chabon. I once bought him a Norman Mailer book for a present. I think if he sees me reading this book I am going to get a look of incredulity from him. I think he will shake his head and smirk. I don't know if I can take that, but I want to read my book.

I've got it!! If I read it instead of watching one of my reality shows I might be able to redeem myself. Now, which one to get rid of? That's a tough one.
Posted by Heather at 5:45 PM

I'm shocked that you thought that a 35-year-old man who gets giddy over Batman movies and gushes over superhero comics would criticize your interest in a book based on a soap opera.